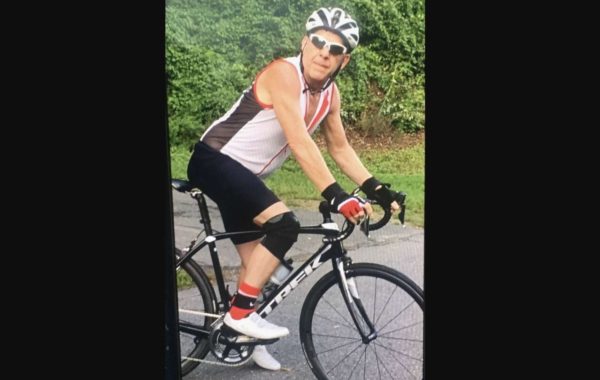 Arlington County police are looking for a middle-aged man with a penchant for bicycling, yelling, mooning, and hitting people.

Police say the man has been involved in at least five separate incidents since the morning of August 11, as described in the press release below. Most involve the cyclist approaching on a trail and becoming enraged at pedestrians who get in his way or tell him to slow down.

There may be even more “trail rage” incidents, like this August 13 confrontation on the Mt. Vernon Trail that’s being investigated by U.S. Park Police.

“I can confirm we’re working with our regional partners to determine if this series is linked to other cases in the area,” ACPD spokeswoman Ashley Savage tells ARLnow.

The police department released the photo of a man they say is the suspect, above, taken during an incident on Aug. 29. Anyone with information is asked to contact police.

The Arlington County Police Department is seeking the public’s assistance identifying a suspect involved in a series of incidents along Arlington trails. In the month of August, police received five reports of an aggressive cyclist involved in confrontations with pedestrians walking along trails. Based on witness interviews and evidence collected, detectives are investigating this as a series involving the same individual.

The suspect is described as a White male with the appearance of someone in his 50’s, approximately 5’8″ to 5’11” with an athletic build and gray hair. He was riding a black bicycle and wearing sunglasses, a white helmet, black shorts, white shirt with red and black trim, red socks and white shoes at the time of the incidents.

Anyone who has information regarding the identity of the cyclist or details surrounding these incidents, is asked to contact the Police Department’s Tip Line at 703-228-4180 or [email protected] Information may also be provided anonymously through the Arlington County Crime Solvers hotline at 1-866-411-TIPS (8477).