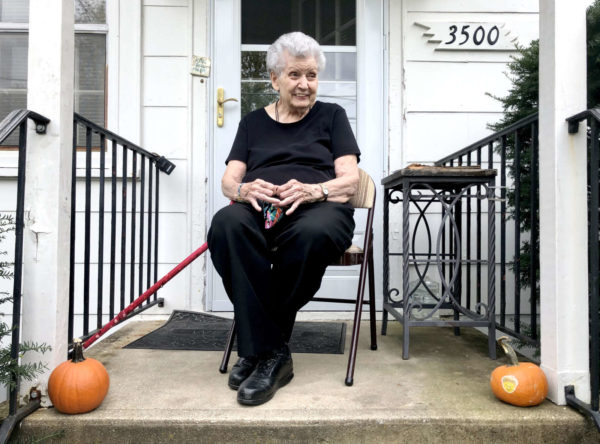 Arlington resident Trudy Ensign turns 100 years old this Sunday, and she is “not ready to give up.”

Ensign, who was born on Oct. 4, 1920 in her family’s farmhouse in southwest Iowa, left her new teaching job there to work in communications for the Army Security Agency during World War II. She has lived in Arlington ever since, most of it in her current home in Ashton Heights.

Just a few days shy of her centennial birthday, some might think she is ready to move into a retirement home or move in with family.

“Somebody may be looking at this real estate,” she said, and stops to laugh. “But I think I’ll keep telling them how the roof leaks and they’ll go someplace else.”

Ensign attributes her longevity to her clean life (she was never a heavy drinker) and her uncomplicated adolescence on an Iowa farm.

Her 100 years could also be attributed to her sense of humor. She says it is “the best thing you can have in life” because she always sees the good in situations and people always treat her well.

She gives a great deal of credit for her position in life to her older siblings, who practically raised her.

“You had a lot more parents than everyone else did,” she said. “You were actually raised by your family.”

One of her older siblings paid for her to go to Simpson College, where she studied to be a teacher. After graduating in May 1941, she moved home and began teaching.

Her career dramatically changed, however, when a Department of Defense recruiter came to town.

“He came into my classroom with a suit on, and so he got my respect, of course,” she said.

He offered for her to work for the Communications Section of the Army Security Agency, processing communications from all over the world.

Ensign knew she did not have a home to go back to after her father remarried, and her older brothers and sisters encouraged her to get out of Iowa and try something new.

“They pushed me out of my nest, and it was good for me,” she said. “At the same time, I knew I had their support.”

She stayed with the agency for the entire World War II effort and for the rest of her career. Her memories of that work are recorded in an oral history at the Arlington Public Library. In 1946, she married William Brown and soon after, they moved to Arlington and bought a house in which to raise their growing family.

“This was a little village at the time,” she said. “There was almost no negative part about it.”

Everyone lived there for the same purpose — government work — and had small weekly salaries.

“You didn’t have to pretend you had money because you know you didn’t and they didn’t either,” she said, laughing.

She and her husband William joined the Clarendon United Methodist Church, where she held numerous leadership positions over the years. After William died of cancer in 1977, she married Allen Ensign, another member of the church and the head usher, in 1984. He died suddenly in October of 2000.

Dealing with the death of a husband is “always tough,” she said, after a long pause.

“[William], he had cancer, you knew his time was limited, but with [Allen], he just came down one morning and was walking through the dining room to the kitchen, and fell and was dead, right like that,” she said. “Those kinds of things are tough when you’re not expecting any problems because no one is ill. The first thing you do is call on your neighbors to help you get through it.”

Those neighbors are her church community. After so many years of volunteering with the church, tracking births, baptisms, weddings and new memberships as secretary and keeping congregants caffeinated during social hours, she considers the parishioners to be her family.

Clarendon Methodist recognized her contributions in 2015 and dubbed her “a faithful servant.”

On the day of her birthday, the church is celebrating with a pandemic parade, cookies for neighbors and friends and a food drive. Her daughter in Florida will come up with her husband and two grown sons, and her daughter living in Alaska will celebrate from afar.

Although she thinks about moving to the Sunshine State, Ensign is not ready to go south just yet. But that does not matter.

“It’ll be sunshine wherever I am,” she said.