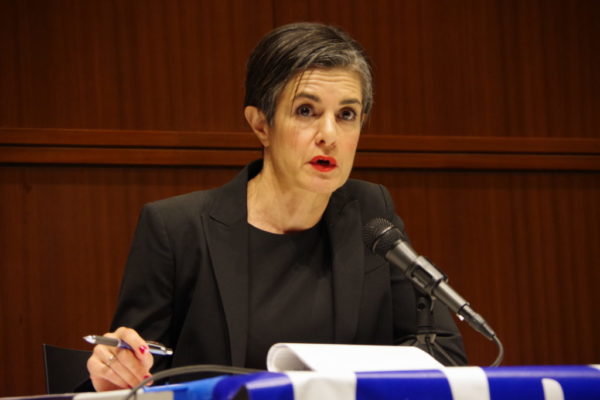 Residents of Arlington and Falls Church are being invited to apply to join the Community Advisory Board for the Office of the Commonwealth’s Attorney.

The board, consisting of seven to 10 members, will meet quarterly to provide input on criminal justice reform and public safety and serve as a liaison between the Commonwealth’s Attorney office and the public.

Board members will also provide their perspectives on how new policies could impact people with drug addictions and who experience homelessness or poverty and will be charged with informing the community of the office’s goals and objectives.

“The idea is to have a diverse representative board so that I can hear what’s going on in specific neighborhoods, what people are concerned about, what are the community’s ideas for what they’d like to see done,” said Parisa Dehghani-Tafti, the Commonwealth’s Attorney for Arlington County and the City of Falls Church.

She said she designed the board to give advice and “drill down into the issues.”

These include making the justice system more restorative rather than punitive, she said. Her office is working with the Restorative Arlington initiative to reduce punitive measures taken in schools, such as suspensions and expulsions, and the legal system, such as seeking cash bail.

Examples of restorative justice for those who commit crimes include diverting young people and people with substance-abuse or mental-health struggles from jails to government services and treatment programs, she said. For victims of crimes, she said the office has changed how it assigns prosecutors to cases so that when cases are delayed, they are no longer passed from prosecutor to prosecutor.

The board-office relationship is a two-way street, Dehghani-Tafti said. The office also has to be able to explain its actions and reasons in an environment that is not “heated and adversarial,” she said.

Dehghani-Tafti began talking about a board in January 2019 when she launched her campaign for the office, but the coronavirus pandemic and subsequent closures delayed the opening of the application from this spring to the fall.

With courts at lower capacity due to COVID-19, the office has also kept busy working with the rest of the criminal justice system to reduce the inmate population and make the county jail safer, she said.

Dehghani-Tafti said she hopes the community board’s first meeting takes place in December, although she may extend the timeline if the first round of applicants is not representative enough of the communities she serves.

“It’s a lot like hiring: You can’t just list a job posting and not push it out to people,” she said. “It takes some work.”

Those who do not join the board may also have another avenue for input. Dehghani-Tafti said she plans to host regular town hall meetings as COVID-19 conditions improve and regulations on gatherings loosen.

The application must be completed and submitted by Wednesday, Oct. 21 at 9 a.m. Further questions about the Community Advisory Board can be sent to [email protected].