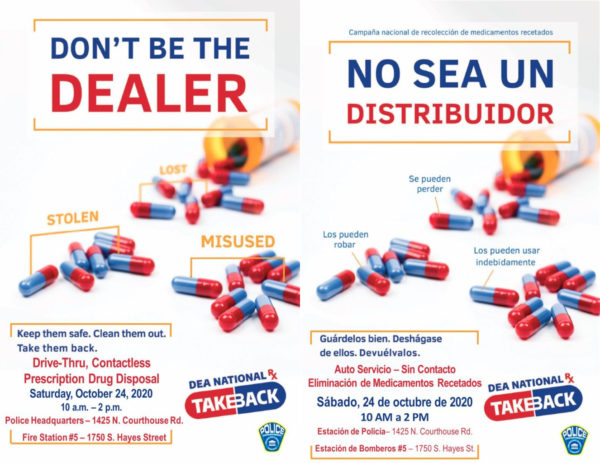 This Saturday, local residents can drop off their expired, unused and unwanted prescription drugs in Arlington for safe disposal.

The Arlington County Police Department and the Drug Enforcement Administration is offering contactless, drive-thru disposal of pills and patches from 10 a.m. to 2 p.m. at police department headquarters (1425 N. Courthouse Road) and Fire Station No. 5 (1750 S. Hayes Street). It’s part of a nationwide effort by the DEA.

“This disposal service is free and anonymous, no questions asked,” ACPD said in a news release. “This is the DEA’s 19th nationwide event since its inception 10 years ago.”

The program comes as the number of police-investigated opioid incidents in 2020 has surpassed those in 2019, with 16 fatal overdoses so far this year — nearly equal to that of the past two years combined.

First responders have been working to counter the overdose trend. In the first seven months of 2020, officers using Narcan helped nine people recover from opioid overdoses.

“Based upon the preliminary investigations into these incidents, police suspect the deaths are linked to heroin and prescription painkillers mixed with fentanyl,” said ACPD spokeswoman Kirby Clark. “While the investigation into these incidents has revealed no direct evidence that the increase is fueled by the COVID-19 pandemic, it is likely a factor given timing, the loss of income and jobs and the isolation of stay-at-home orders.”

The pandemic forced the police department to cancel the spring iteration of the drug take-back event, which is normally held twice annually. This Saturday, all participants are expected to practice physical distancing and wear a face covering while dropping off items for disposal.

Upon arrival, participants should stay in their vehicle until they reach the unloading areas, where officers will be on hand to take items for disposal. A separate area will be available for those arriving by bike or foot.

The event does not accept liquids, nor needles and syringes, collectively known as “sharps.”

“For those looking to dispose of sharps, Arlington County recommends placing the item in hard plastic container such as detergent bottle, cap securely and place in trash cart,” the news release said. “Do not put this container in your recycling.”

During the take-back event in October 2019, 211 pounds of medications were collected, Clark said.

Arlington County has four permanent drug take-back boxes available. To date, these boxes have collected 1,572 pounds of medications in 2020, and nearly 5,068 pounds of prescription drugs since they were installed in June 2018.

The public can safely dispose of prescription medications, ointments and patches, pet medications, vitamins and over-the-counter medications 24/7, “no questions asked,” at the following locations:

END_OF_DOCUMENT_TOKEN_TO_BE_REPLACED

More Stories
Earn a Security-Related Degree at the Schar School with the Diana Davis Spencer Foundation ScholarshipWhat’s Next: Hope Is an Action