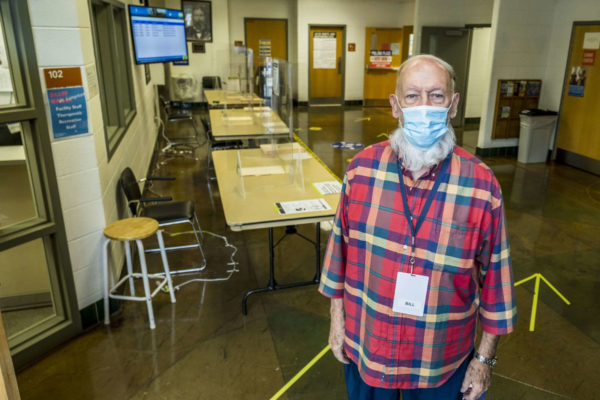 From record early voting turnout to the volume of volunteer requests to the number of first-time voters, the word “first” characterizes many aspects of the 2020 election in Arlington.

But for 83-year-old poll volunteer Bill Thatcher, 2020 is his last year helping people exercise their “supreme privilege of voting.”

For the past 45 years, the Arlington resident has volunteered as a precinct chief at the polls, moving wherever he is needed. This year, he is an assistant chief of early voting at the Langston-Brown Community Center along Lee Highway.

What started a half-century ago as a minor way to give back to the community has become a mission to safeguard a right people have sacrificed everything to secure. Thatcher’s goal is to clear any impediments blocking people from voting and make everyone who walks into his precinct feel comfortable.

“I reflected just last evening, there are people who have shed blood and died for this freedom to vote, to keep freedom free,” he said.

After the election, Thatcher will have more time to focus on his day job as a real-estate broker, which he has had for 50 years. He just renewed his license, and plans to work so long as he is in good health.

2020 is a memorable election year to end on, with more than 50% of active voters having already cast early ballots. It thrills Thatcher, who lives in a neighborhood near the East Falls Church Metro station, to process the votes of many first-timers, several of whom are seniors.

Although lines can stretch up to two blocks, they move at a brisk pace, he said. He thinks the use of early voting to keep the Election Day crowd size down should stay when the pandemic fades because people seem to enjoy early voting. One pandemic precaution — curbside ballot pickup — did not prove popular, however. People want to see their ballots processed, he said.

“A few ask for receipts,” he said.

And it breaks his heart whenever someone has to be turned away. One year, a friend arrived at Thatcher’s precinct about 30 seconds after 7 p.m. and the polls had closed. By law, he could not let his friend in.

“It grieved me,” he said. “He made every attempt to come, he wanted to vote, he was ready, willing and able, registered and everything, but just because of time constraints, was not able to vote.”

“Make sure that you give them the assurance that their vote is important and deserves to be counted,” he said.

He started working at the polls in 1975, on the suggestion of his neighbor and distant relative, who had decided to step back from volunteering. Similar to his relative, Thatcher desires to pass his spot on.

“I just feel I’ve done it for this length of time and I should let someone else enter in now and do some volunteer work,” he said.

If this year is any indication, there are many who are eager to take up the baton. Thatcher said more than 2,000 people responded to this year’s call for poll volunteers.

“It’s fantastic we’ve had a huge influx in new workers this election who are stepping up to cover for those who cannot work due to health risks,” said Eric Olsen, Arlington’s Deputy Director of Elections, in an email.

Olsen said he hopes some of the new volunteers will stay on and have a rewarding experience working the polls for years to come, in the way that Thatcher has.

“People like Bill are the lifeblood of making elections function properly,” Olsen said. “They happen with preparation, trust, and most importantly — people.”