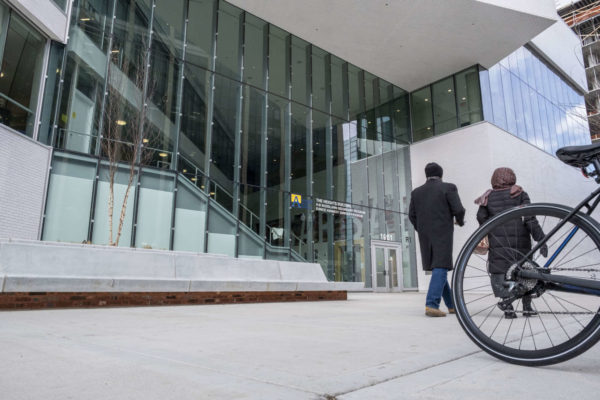 (Updated at 10:40 a.m.) A fill-in-the-blank question during a science class at H-B Woodlawn has caused an uproar.

The chemistry question, asked Tuesday during what ARLnow is told was a 10th grade class, references the police killing of George Floyd.

“George Floyd couldn’t breathe because a police officer put his _____ George’s neck,” the question reads. The answer is “neon,” the element that sounds like “knee on.” 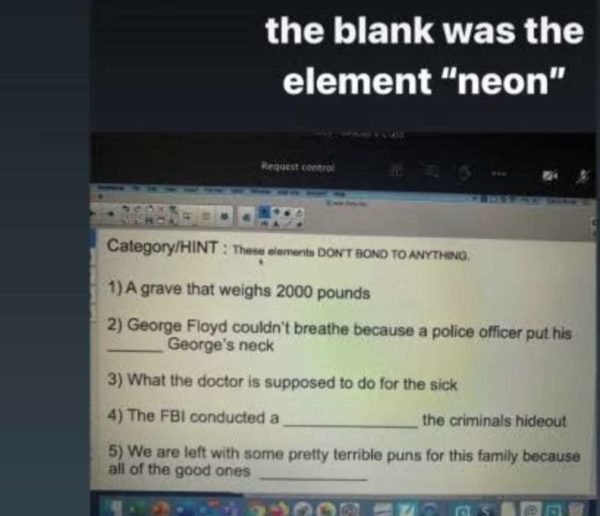 Classes are currently being held virtually at Arlington public schools. Shortly after the class, a screenshot of the question started circulating on social media, and parents started calling the school.

“There is no diversity in my school and apparently there was a bunch of white silence when this happened this morning,” a student’s social media post said. “White students were making excuses or seemed ‘too tired to talk about it’ shame on those people that’s disgusting.”

The teacher “tried to pass it off as something ‘everyone would know/easy to get,'” the post adds.

H-B Woodlawn’s student body is 4.4% Black, according to civil rights statistics published by Arlington Public Schools. That’s well under the 11% average across all APS high schools.

In a letter to families sent Wednesday, H-B’s principal said the secondary program — once known as “Hippie High” for its liberal approach to education — “does not tolerate any form of cultural or racial insensitivity.”

“We will be meeting directly with the students in the class, and will work with all of our H-B Woodlawn students to process the incident,” the letter goes on to say. “Our Student Services Team will be available for individual counseling and students can reach out directly to me as well.”

On Thursday, Superintendent Francisco Durán weighed in, with an email sent to all APS families.

“The content referenced the killing of George Floyd in an unacceptable and senseless way, which hurt and alarmed our students, staff, families, and the community,” Durán wrote. ‘The reference showed extremely poor judgement and a blatant disregard for African American lives.”

“The teacher has been relieved of classroom duties while an investigation related to this matter takes place,” Durán continued. “I want to assure everyone that this situation will be handled in accordance with our policies, and all staff are held to the highest standards of professional behavior.”

The principal’s letter, obtained by ARLnow, is below.

The H-B Woodlawn community does not tolerate any form of cultural or racial insensitivity. We prioritize making H-B Woodlawn a safe and inclusive space for all students, staff, and parents. Yesterday an incident occurred that conflicts with our core values of respect, trust, social justice, and diversity.

During a class presentation a teacher shared an example that showed significant racial insensitivity. It was unacceptable. We will be meeting directly with the students in the class, and will work with all of our H-B Woodlawn students to process the incident. We will use all of the HBW and APS resources at our disposal to do so. Students should reach out to a trusted adult at HBW if they want to discuss this matter further. Our Student Services Team will be available for individual counseling (emails below) and students can reach out directly to me as well.

Though this is an ongoing matter, and we cannot provide additional details, we appreciate all the students, parents, and alumni who have reached out — for their concern, and their thoughts and ideas on productively moving forward. We will continue to update the community on the steps we are taking both in the short-term and long-term. Every student deserves a positive educational experience where they feel safe, secure, and have a strong sense of belonging.