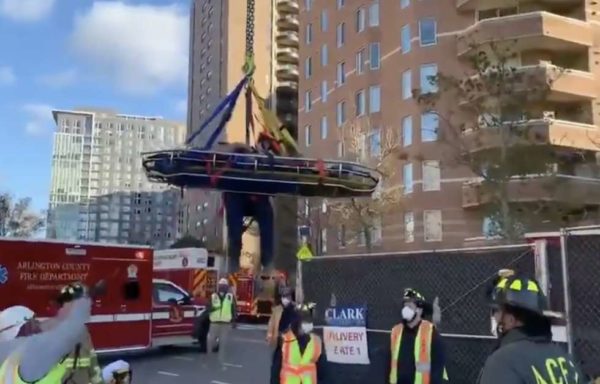 (Updated at 10 a.m.) An injured worker was rescued from the Amazon construction site in Pentagon City this morning.

The initial call for a worker injured at the bottom of the construction site was made at 8:08 a.m.

Emergency vehicles blocked roads around the site along S. Eads Street as firefighters used a construction crane and a stokes basket to hoist the worker to safety.

“We sent paramedics as well as our technical rescue team to the scene in order to set up a crane operation to remove the worker,” said Arlington County Fire Department spokesperson Taylor Blunt. “After the patient was hoisted from the trench, we transported him to a hospital in stable condition. The operation took about 15 minutes. ”

It was not immediately clear how the worker was hurt.

The construction site will eventually be home to the 2.1-million-square-foot first phase of Amazon’s permanent HQ2, which set to open in 2023.

#Video from the scene as the patient was being hoisted in a stokes basket to safety. pic.twitter.com/b3fCcChgPP