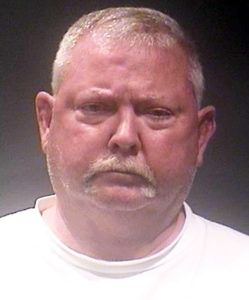 A Virginia man has been arrested for a series of rape cases in Arlington that date back to 1991.

Arlington County Police say Michael F. Thompson, who is now 63 and a resident of Virginia’s Northern Neck region, used a gun to rape at least two women near the East Falls Church Metro station. He was linked to the cases after a reexamination of evidence, including DNA evidence, that ACPD’s Cold Case Unit initiated in 2017.

Thompson was identified as the suspect due to “forensic evidence combined with thorough investigative efforts,” and was arrested at his home on Tuesday morning, according to police.

ACPD is now asking anyone with additional information about the nearly 30-year-old cases to step forward.

The Arlington County Police Department’s Cold Case Unit is announcing the arrest of a suspect in a cold case rape series. Michael F. Thomson, 63, of Montross, VA, was arrested and charged with two counts of the following charges: Rape, Abduction with the Intent to Defile, Forcible Sodomy and Use/Display of a Firearm during the Commission of a Felony. Additional charges are anticipated. He is being held in the Arlington County Detention Facility without bond.

Between January and December 1991, Arlington County Police investigated multiple reports of rapes and attempted rapes involving female victims walking from the East Falls Church Metro Station. In each reported incident, the victims were approached by an unknown male who displayed a firearm. Three cases were linked by DNA evidence with a fourth case being investigated as part of the series due to similarities with the other cases.

At approximately 6:00 p.m. on January 17, 1991, the female victim was walking home from the East Falls Church Metro in the 4800 block of Little Falls Road when an unknown male suspect approached her, brandished a firearm and forced her into a grassy area between two homes. The suspect raped the victim before fleeing the scene on foot.

At approximately 7:40 p.m. on February 13, 1991, the female victim was walking from the East Falls Church Metro to her parked vehicle in the 2300 block of N. Tuckahoe Street when she observed the unknown male suspect walking towards her. The suspect brandished a firearm, forced the victim to the side of a residence where he raped her before fleeing the scene on foot.

At approximately 10:00 p.m. on March 6, 1991, the female victim was walking home from the East Falls Church Metro in the 6300 block of Lee Highway when she was approached by an unknown male who alleged to have a firearm. The suspect forced the victim to the back of a nearby residence and directed her to remove her clothing. The suspect placed the firearm to her head and told her to be quiet. The suspect then asked the victim if she wanted him to leave and when she said yes, he fled the scene on foot.

At approximately 7:08 p.m. on December 2, 1991, the female victim was walking from the East Falls Church Metro to her parked vehicle in the 6100 block of N. 22nd Street when she was approached by an unknown male suspect brandishing a firearm. When the victim screamed, the suspect ran away and fled from the scene in a vehicle. As the suspect was fleeing, he dropped the baseball hat he was wearing. DNA from the baseball hat was later linked to DNA recovered in the January 17 and February 13 incidents.

In 2017, the Cold Case Unit initiated a fresh look at these unsolved cases including the review of cold case files, crime scene evidence and laboratory results. The DNA was resubmitted for additional analysis including phenotyping and genetic genealogy. The analysis resulted in additional information that led detectives to identify Michael Francis Thomson as a possible suspect. Forensic evidence combined with thorough investigative efforts linked the suspect to the 1991 incidents. He was taken into custody without incident at his residence on the morning of December 1, 2020.

This remain an active criminal investigation and anyone with information related to this series is asked to contact Detective R. Ortiz at 703-228-4702 or [email protected] Information may also be provided to the Arlington County Police Tip Line at [email protected] or anonymously through the Arlington County Crime Solvers hotline at 1-866-411-TIPS (8477).