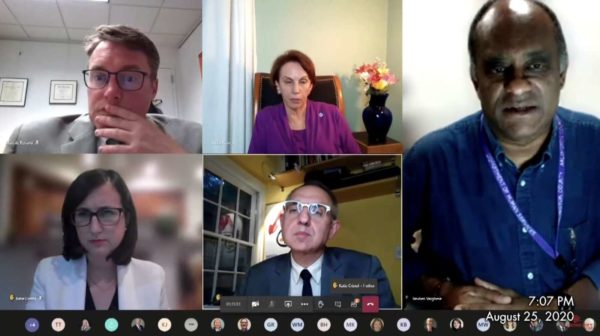 Working remotely started as an experiment but is now a permanent option for some U.S. companies. Now, the trend may be coming for public meetings.

Virtual public meetings began in the spring after an emergency order from Gov. Ralph Northam authorized them. Normally, according to Virginia code, in-person meetings are required. Existing law lets officials attend up to two meetings virtually, if a majority is present in-person, and they must state for the record their reason for staying away.

For a group of women in public life from Arlington County to Spotsylvania, these rules represent barriers to equal participation.

Arlington County Board Chair Libby Garvey is one of those women. Today (Wednesday) she testified before the Virginia Freedom of Information Association Council –a state agency which helps resolve disputes over Freedom of Information issues — on behalf of the idea of virtual attendance. The Council will be making a recommendation to the General Assembly.

Recently, a bill introduced by Del. Mark Levine (D-45), allowing more flexibility in online meetings, was passed by the House of Delegates. It has yet to be passed in the state Senate.

But the women and men supporting virtual attendance, who also pledged their support in a letter to the FOIA Council dated Tuesday, are asking for more flexibility than in the event of a serious medical condition. They advocate for a virtual option whenever a public official needs it.

“A lot of us are realizing, particularly women, why are we not allowed to participate virtually if we need to?” Garvey said. “I think you could argue that mostly men run these things because they don’t have these responsibilities at home.”

Currently, if a member wants to participate virtually, she must tell the board why, which Garvey said was restrictive.

“Maybe your reason is that you have a child in a mental-health crisis,” she said. “Do you really want to tell the whole world why you’re home?”

Garvey said she feels strongly about the virtual option because juggling kids was part of the trajectory of her career. She stayed home with her kids, doing part-time work, and eventually got involved in local politics when her kids were old enough.

Anecdotally, Garvey said the virtual option has also been a boon for the number of people listening to meetings during the pandemic. The rates of people speaking, however, appear to have remained about the same, according to Arlington County Board Clerk Kendra Jacobs.

The county has not been collecting precise data about virtual meeting participation, Jacobs said, but based on her observations speaker participation has not changed drastically. Rather, there have been a few virtual meetings on hot-button issues, including a forum on race and equity and one on a gun ordinance, that would have drawn crowds, regardless of the venue.

“It really depends on the issue at hand, if people are interested in something, they’re going to participate,” she said. “The virtual options make it easier, because they don’t have to worry about things like childcare, missing out on work.”

Meanwhile, Garvey said she has been on many Zoom calls where the moderator has announced the number of participants with surprise, saying “We have a lot of people on” or “This is more people than we have ever had.”

There is one group of attendees who are notably absent, however: older citizens who have attended and spoken at meetings for years, Jacobs said. Roughly half have dropped off, and she attributed this to not wanting to figure out the virtual setup.

Jacobs said it seems that some younger people feel more comfortable coming to meetings, now that they are virtual, and could be replacing those who have dropped off because of tech barriers.

“The whole virtual meeting option has just continued peoples’ ability to speak out on issues that are important to them,” she said.