Arlington Public Schools is preparing data that will compare students’ grades this fall, during distance learning, with pre-pandemic grades in the fall of 2019.

Superintendent Francisco Durán will present the highlights of this report at the Dec. 17 School Board meeting, APS spokesman Frank Bellavia said.

“We are in the process of producing a report showing a comparison of current first quarter grades for secondary students to previous years,” Bellavia said in an email. “The analysis will include a breakdown of student grades by sub-groups, such as English Learners, Students with Disabilities and economically disadvantaged students.”

In response to the numbers, FCPS school board members discussed extending the school year.

There is similar interest in a report for Arlington. After Durán presented some preliminary data on grades in November, school board member Nancy Van Doren indicated she wanted to see a comparison of 2019 and 2020 first quarter grades. Meanwhile, member Tannia Talento said she would like kids to have extended school year options to make up failing grades.

“Do we have a plan in place? Can we make a summer school plan to be proactive versus reactive?” Talento asked.

The early data only looks at grades from the first quarter of the 2020-21 school year. During his presentation, Durán said elementary students are more consistently meeting expectations in math, while there is a wider variety of results for reading.

In the early grades, especially first- and second-grader, “students are not making expected progress and need supports now and in the long term,” Durán told the School Board, about reading-related achievement.

At the high school level, freshmen had the highest share of failing grades, 10.1%, in the first quarter of the 2020-21 school year, according to APS data. Following behind them were sophomores and juniors, where failing grades — Es, on the APS grading scale — make up 8.4% of grades; for seniors, that number is 6.8%.

The percentage of Es among middle schoolers is much lower, hovering between 4 and 5%, APS data shows.

It was not immediately clear how this year’s rates of failing grades compared to the previous year, during standard in-person learning. 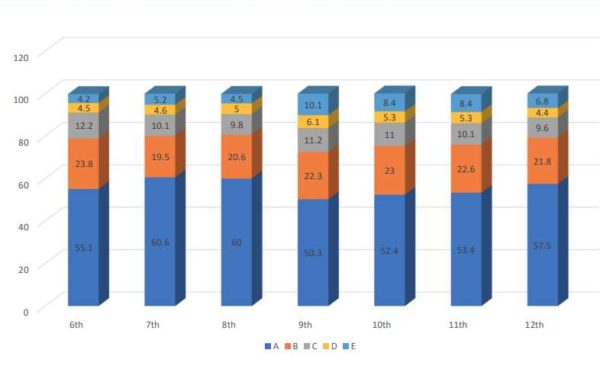 Durán told the School Board that APS formed focus groups to examine student progress. The system will be looking at grades, social-emotional learning and the impact of interventions on achievement.

“We’ve heard from many students and families that they are making profess that they are successful and we received many emails that they are not,” Durán said. “We need to understand that this is not a one-size fits all.”

New information from focus groups will be shared in future School Board meetings, he said.

Two mothers of children in Arlington Public Schools told ARLnow that they would like to see this data because it could help inform APS on ways to improve distance learning and when to return kids to school.

“If that data were available, it could help set policy,” Cristina Cheyne said, adding that mental health should be a data point.

She and fellow mom Karen Simpson said they have watched their kids’ grades slip and their motivation for school wane. Both attributed some of the flip to the platforms being difficult for their children to navigate, which turned into a loss of interest and focus and devolved into mental wellbeing struggles.

“These kids are good kids, and now they’re failing,” Cheyne said. “We just need to take into account all the negative impacts on these kids. It’s going to be hard to recover.”

Simpson said that through a number of phone calls and conversations with her child’s teacher, who picked up on the shift in her student’s achievement, she got the interventions her child needed.

“Kids are falling behind and kids’ mental health is declining,” said Simpson, who added that she herself works in the e-learning field. When she heard about the report from FCPS, she said she was unsurprised.

“Many of these kids don’t fully understand remote working, especially when you’re transitioning into a middle and high school — that’s rough,” she said.

END_OF_DOCUMENT_TOKEN_TO_BE_REPLACED

More Stories
Morning Poll: Will You Be Traveling for the Holidays This Year?Metroway is on the Chopping Block as WMATA Eyes Bus Cuts in Budget Proposal