Kids who want to talk to Santa Claus can drop off letters at the Gulf Branch Nature Center through Dec. 14.

For the first time, the park is collecting letters to send to St. Nick, rather than facilitating a weekend of in-person visits with the jolly one himself. In non-pandemic years, Santa visits typically drew up to 300 kids and families, park manager Rachael Tolman said.

So far this year, about a dozen kids come each day to drop off letters, she said.

Collections will end on Dec. 14, a Monday, to allow the snail mail ample time to reach the North Pole before Santa gets too busy, she said. Kids are encouraged to include their return address so he can respond with a postcard, and to bring canned goods that will go to the Arlington Food Assistance Center. 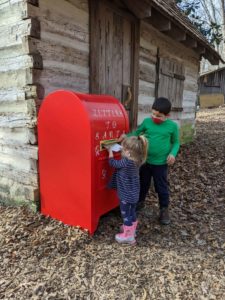 “Due to the pandemic, Santa won’t be visiting, so he very kindly let us set up a mailbox,” she said. “We tried to come up with other ways to have Santa in person, but we figured that this would be the best option because everything is so up in the air from week to week.”

A mailbox is not the same as an in-person visit, but it feels vintage — “a little old school,” Tolman said.

The park manager said she “absolutely” remembers writing to Santa as a kid.

“I can’t remember what I asked for, but I remember asking about Mrs. Claus and the reindeer, and I would leave carrots out for reindeer — along with the milk and cookies — because they were doing all the work,” she said.

Tolman said she has received many emails thanking her for the mailbox from people who had always brought their kids to see Santa, and this year, were not sure what to tell them.

“They were so relieved that we put the mailbox out, so that their kids could keep the tradition of coming,” she said.

Visitors can also check out the cabin, decorated for the holidays.

“We’re glad to keep the magic of the season as best we can,” she said.

END_OF_DOCUMENT_TOKEN_TO_BE_REPLACED

More Stories
Open Houses in Arlington This WeekendJUST IN: New Names for Route 29 Narrowed Down to Ten