(Updated at 3:20 p.m.) Stand Together Ventures Lab, part of the Arlington-based philanthropic organization Stand Together, is helping launch and fund startups that could help people in transformational ways.

The nonprofit venture capital team invests money from Stand Together Foundation, which gives resources to community-based organizations nationwide to help break cycles of poverty. The umbrella organization for the Lab and the foundation, Stand Together, is located at 1320 N. Courthouse Road in Courthouse and was founded by politically-active businessman Charles Koch.

Koch’s Charles Koch Institute is located in the same building.

But Ventures Lab Managing Director Sihyun Choi will not invest in just any startup that purports to have a social impact. It has to take a revolutionary approach to a problem, not an evolutionary one, he said.

“Evolutionary ideas tend to be less risky,” he said. “We see a lot of solutions that help things the way they exist…That’s an easier thing to solve for than changing the system as a whole.”

Choi joined Ventures Lab this March, and in these last 10 months, he said he has learned how hard it is to find organizations that attack the roots of problems in the spheres of racial justice, criminal justice reform, poverty and immigration. He also joined as Ventures Lab was getting started and as the U.S. was bracing for COVID-19.

The pandemic heightened the urgency around the issues that need solutions, he said. 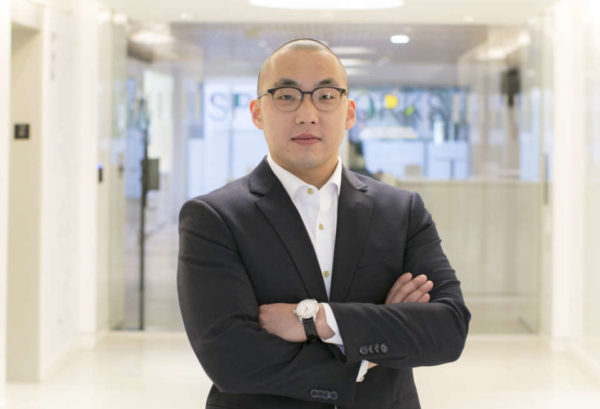 “My personal view is that expectations before March, and post-March — especially with the social unrest around racial justice and criminal justice reform needs across the country — have become exacerbated,” Choi said. “That certainly accelerated both the clarity of the work and the importance of it, and frankly, how quickly we needed to mobilize our work around that.”

The first group of startups receiving money from Choi and his team of ex-venture capitalists and corporate operations professionals reflect the topics people latched onto in 2020, which the pandemic in part revealed and exacerbated. These issues include criminal justice reform and racial inequality in unemployment.

From 140 startups it looked into this year, the Lab picked four: JusticeText, Risekit, Shift, and a fledgling company Choi cannot yet name. Typical checks range from $100,000 to $1 million, depending on the age of the company and the needs of a founder, he said.

JusticeText uses AI to transcribe audio and visual evidence for public defenders, who often do not have the time to review extensive footage and recordings themselves or the resources to hire a transcription service. Some estimate about 80% of crimes involve video evidence.

RiseKit helps people facing significant employment barriers — such as a criminal record, housing and food insecurity or a non-traditional education — find jobs. Shift helps veterans translate their skills from the military into jobs.

Choi could not name the fourth organization yet because it will launch next year, but he said it shows people in underserved communities — who may have no idea that their interests can align with careers — how to convert a passion into a viable life path.

Soon, Ventures Lab aims to invest in more startups, addressing other realms such as health care and education. The team is not aiming to invest in a certain number of companies, and it will take chances on those that may not generate lots of revenue, Choi said.

“We are exclusively biased toward if it is driving social impact — and if it makes money, great,” he said. “We’ll invest in the things we think are really important. By nature, it’s hard to put a quota on that.”

Asked if the lab will invest in Arlington-based startups, Choi said, “We’d love to continue to see opportunities here in the D.C. area, since the start-up ecosystem here is certainly growing.”

END_OF_DOCUMENT_TOKEN_TO_BE_REPLACED

More Stories
Man in ‘Jabbawockeez’-Style Mask Robs Couple at GunpointMaking Room: Is “Common Understanding” Possible When It Comes to Housing?