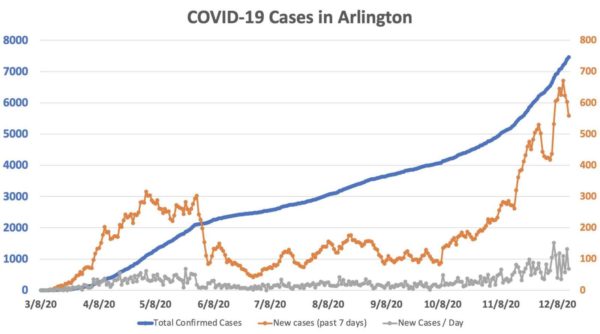 After the county’s seven-day trailing average rate of new daily cases hit a record of 96 on Friday, the average has trended down and, as of this morning, currently stands 80. That’s still higher than at any point in the pandemic prior to last week, however.

Arlington’s test positivity rate, meanwhile, has been slowly falling, and currently stands at 7.3%, down from a recent high of 8.7%.

The cumulative number of cases, hospitalizations and deaths in Arlington is currently 7,463, 612 and 164, respectively.

The new Pfizer COVID-19 vaccine is currently being distributed across the country. This morning a nurse in New York City became the first person to publicly receive the vaccine in the U.S. after its regulatory approval last week.

Despite the optimism around the vaccine, it will still take months for most people to be vaccinated. In the meantime, hospitalizations statewide have hit another record.

“As the first shipments of a COVID-19 vaccine rolled out of a Pfizer plant in Michigan on Sunday morning, a record 2,154 Virginians were hospitalized for treatment of the virus, and caseloads and deaths continued to increase,” InsideNova reported on Sunday. “The number of hospitalized patients statewide was up about 200 from a week ago and nearly 400 from two weeks ago as the the recent surge begin to translate into more serious cases, according to data from the Virginia Hospital and Healthcare Association.”

“Although it seems that the DMV is doing better than a lot of the country, we’re also seeing records set for new cases, deaths, and hospitalizations,” he wrote. “Locally, hospitals are full or getting full. [Emergency departments] are pushed to capacity and beyond.”

“About 40% of the patients I saw had COVID. Overall, about half of my patients required admission to the hospital which is a much higher rate than normal,” Silverman continued. He added “COVID is so prevalent in our patients” that he switched to wearing an N95 mask throughout his nine-hour shift and avoided taking it off even to eat or drink.