Michael Weigand was one of those “boots on the ground” Army platoon leaders, the kind often depicted in the movies.

But when the Army founded the Cyber Branch — the first new branch since the Vietnam War — Weigand decided to join. He and fellow West Point graduates James Correnti and Josh Lospinoso became part of the first 70 officers to trade a physical way of securing the nation for a virtual one.

“During that time, we started to appreciate that it is more than IT systems that need to be defended from criminals and foreign adversaries,” he said. “There’s been a lot of attention about securing power systems, dams and critical infrastructure, but transportation has the same needs.”

So they founded Shift5, a Rosslyn-based startup transportation data company that Weigand said helps businesses and governments run “smarter, safer and more efficiently by unlocking data.” Its office is located at 1100 Wilson Blvd.

During their stint in the Cyber Branch, the three discovered transportation ran heavily on computers but few were monitoring the data these computers collected. To protect a system, Weigand said, data has to be monitored. But the data can do so much more. 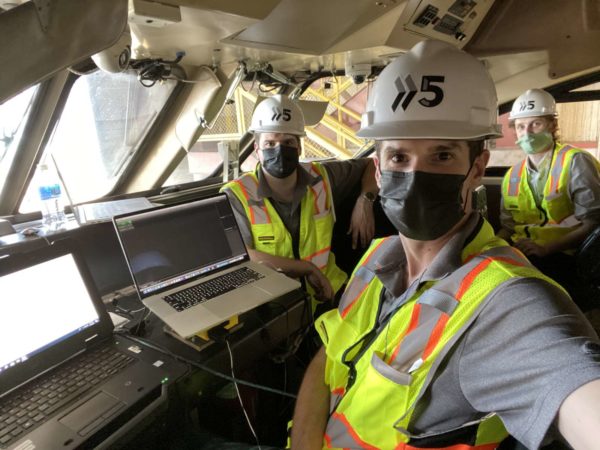 Shift5 puts that data to work. The information can automate menial tasks and make systems more reliable, he said. It can also help executives make smarter business decisions, from choosing what to invest in to analyzing how a fleet is aging and predicting when maintenance needs to be done.

“We call all of that data that is flowing inside these big transportation systems, but is not being actively recorded, dark data. We like to shine a light on that, and collect, record, monitor it from cyber-security perspective, so that everything is operating efficiently,” Weigand said. “That is where Shift5 lives.”

“By supporting both customer groups, we get to help bring the best of both worlds to our customers,” he said.

Less than a year after the startup was founded in June 2019, the coronavirus hit, and Shift5 noticed customers needed their data monitored for security and efficiency more than ever. One hard-hit area was public transit.

This year, Shift5 started working with heavy commuter rail, which experienced steep declines in ridership due to the pandemic. It is more important now to be efficient with resources, Weigand said.

“They save a lot more money than they pay for the service,” he said. “It’s an awesome service with an additional security benefit.”

Next year, the group plans to expand into even more commuter and freight rail.

“There’s an enormous enterprise value we can provide to save money, make operations more streamlined and provide security benefit,” he said.