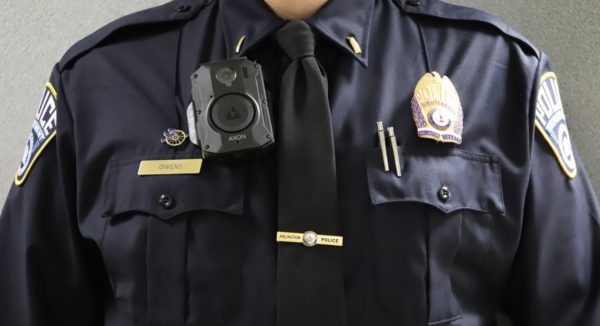 The relatively swift implementation of the new body-worn cameras follows a community discussion of police practices in Arlington, which itself followed the civil unrest caused by the police killing of George Floyd in Minneapolis this past May.

The department already has cameras in police cruisers and interview rooms.

The Arlington branch of the NAACP launched a petition in June calling for ACPD to implement body-worn cameras. The online petition now has more than 12,000 signers.

“The Arlington County Police Department welcomes the use of body worn camera technology as an additional tool in our commitment to providing professional law enforcement services to the Arlington community,” Acting Police Chief Andy Penn in a press release. “We recognize our community’s trust is earned each day with every interaction. I am confident these cameras will build upon our longstanding history of community policing by highlighting the professionalism of the agency while instilling greater public confidence as we continue to hold ourselves accountable to the highest professional standards.”

In June, County Manager Mark Schwartz announced funding for a Body Worn Camera program for the Police Department, Sheriff’s Office, and Fire Marshal’s Office as part of his proposed FY 2021 Capital Improvement Plan (CIP). In July, the County Board approved the CIP and funding for the program. Specifically, the CIP provided $268,000 for body worn camera hardware; $244,000 for upgrades to four County courtrooms to support the technology; $536,000 for data storage, software, and maintenance; and $755,000 for replacing existing in-car camera systems to one compatible with body worn cameras.

In November, the Police Department, Sheriff’s Office and Fire Marshals’ Office sought the public’s input and feedback on draft Digital Evidence Management System policies, regulating digital audio and video recordings captured by body worn cameras, in-car cameras, and interview room cameras. The goal of this engagement was to create model policies utilizing established best practices and to continue to strengthen community relations and professional standards within the departments by enhancing transparency, accountability and training. All comments were reviewed and evaluated for incorporation into the policies.

Despite the new body cameras, Arlington County has a policy of turning off public feeds of traffic cameras during police and fire department incidents.