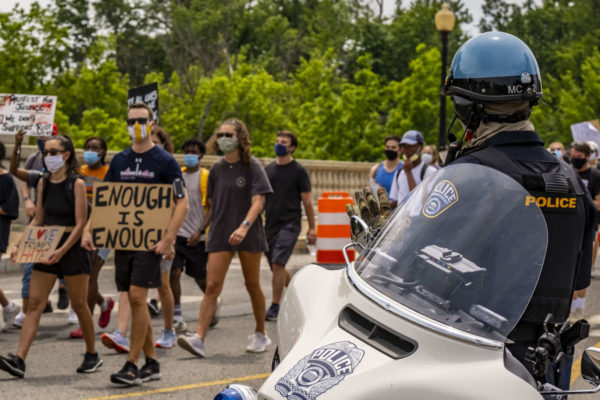 The Arlington branch of the NAACP has thrown its voice into the push for body-worn cameras to be implemented in the Arlington County Police Department.

A Change.org petition calling for Arlington County leadership to prioritize body-worn cameras sits at 2,409 of its 2,500 goal at the time of writing.

“Arlington is the only jurisdiction of size in the entire DC-region without a Body-Worn Camera (BWC) program,” Arlington Branch NAACP #7047 said in the petition. “As leaders, we must prioritize programs that encourage public confidence in our government.”

The NAACP said in the petition that body-worn cameras:

“We must implore our elected leaders in Arlington County to prioritize appropriate funding for the BWC program,” the NAACP said. “Removing programs that are non-essential, ineffective, or which disproportionately target minorities can generate funding for BWCs and support community resources. Additionally, exorbitant funding from Amazon could be immediately reallocated to fund 100% implementation of BWCs.”

The petition has attracted the attention of some local leadership who expressed support.

“I am writing in support of your efforts urging Arlington County to implement a Body-Worn Camera program,” Del. Patrick Hope said in a letter. “While I was aware that these devices are widely deployed throughout the United States, it came as a complete surprise to learn that Arlington County remains the only jurisdiction of size in the D.C.-region without a functioning Body-Worn Camera program.”

Neighboring Alexandria, which has a population roughly two-thirds that of Arlington, also has no body camera program for police officers, after a planned pilot program sat delayed for years due to budgetary concerns. Fairfax County began implementing body cameras in the first quarter of 2020. Body camera footage recently led to a Fairfax County officer being charged with assault.

“These devices help strengthen police accountability, improve agency transparency, reduce use of force incidents, reduce citizen complaints against officers, and help solve crime,” Hope said. “This technology also has proven to produce significant savings in time and expense for communities as both complaints and cases are resolved much faster using body-worn camera evidence.”

Hope wrote another letter to County Board Chair Libby Garvey urging the County to consider creating a body-worn camera program.

Efforts to implement body-worn camera programs on a local level could be stalled by legislation approved earlier this year that would require localities to follow policy and standards yet to be laid out by the Virginia Department of Criminal Justice Services.

Arlington Chief of Police Jay Farr also recently said that costs are a major hurdle for the implementation of body cameras.

“It’s extremely expensive,” Farr said in an interview with local Black Lives Matter organizer Yolande Kwinana last week. “The County Board, after getting all the facts, made the decision not to fund them.”

Farr said the total for the first year of using the body cameras was $2.5 million, which he attributes primarily to regulations requiring departments to retain terabytes of data for years, in addition to the cost of new full-time employees to manage the data and the cost of the cameras themselves.

Body-worn cameras could be a tough sell for a county still reeling from the financial cost of the COVID-19 shutdown.

“While I recognize all localities are struggling due to the financial impact of COVID-19, as leaders we must prioritize programs which encourage public confidence in our government,” Hope said. “It is my belief that a fully-funded body-worn camera program would do just that.”

Part of the NAACP petition also included a call for the implementation of a civilian review board of the police department with subpoena power, something for which Farr had earlier expressed some support.

“We must implement this technology and civilian oversight to protect citizens from police brutality and enforce accountability,” the NAACP said. “This is a humanitarian crisis that should be acted upon now to end racial injustice and improve equity in our criminal justice system. Our demand for compliance and accountability from law enforcement will not go unheard.”