Starting today (Tuesday), fencing is set to be installed for an interim dog park in Rosslyn’s Gateway Park.

Work on the dog park, including the installation of lighting and a water fountain, started in 2020. It is slated to finish in the first quarter of 2021, said Mary Ann Elliott, the director of R-Dogs, which is one of the main forces behind the project.

Eventually, the area will be fenced-in, with a section for small and disabled dogs and one for large dogs.

The interim dog park at 1300 Lee Hwy fills Rosslyn’s growing need for dog parks, of which the county will need three by 2035, according to a county planning document. The temporary facility will be in place until a Park Master Plan is developed and funding becomes available for a potential permanent replacement.

The interim park is the result of nearly three years of work by R-Dogs, a community group-turned-nonprofit, and the Rosslyn Business Improvement District.

“It has been a long process with rules and regulations that one comes to find with any rules of county governance,” said Elliott. “I’m very pleased, overall, with the County, and thrilled with what the BID has contributed.”

Mary-Claire Burick, President of the Rosslyn BID, said the park represents a “wonderful partnership” among the County, R-Dogs and the BID to meet the needs of Rosslyn’s growing residential population.

“We are excited to add in a designated place where owners and their pets can safely enjoy the fresh air,” she said in a statement. 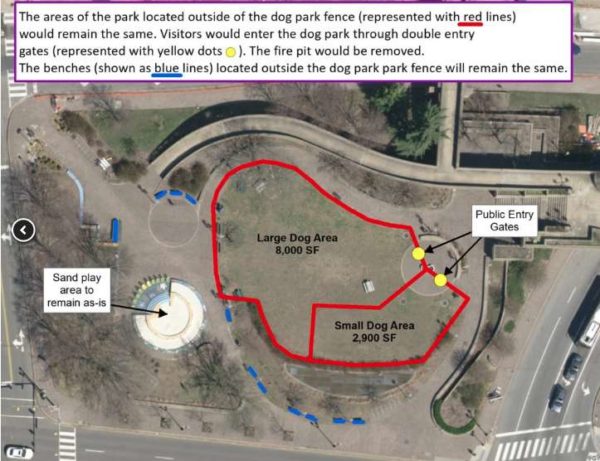 The Arlington parks department anticipates a dog park will be considered in the master planning work, but will need to go through a community process before it can be more specific, department spokeswoman Susan Kalish said in an email.

Elliott said the interim dog park will cost about $40,000, and the BID, a veterinary practice, several small businesses and individuals have chipped in to fund it. This sets the dog park apart, she said.

“All of the other dog parks in the County have a sponsor group of community residents, but did not raise money or establish a company with by-laws in order to make it a reality,” she said.