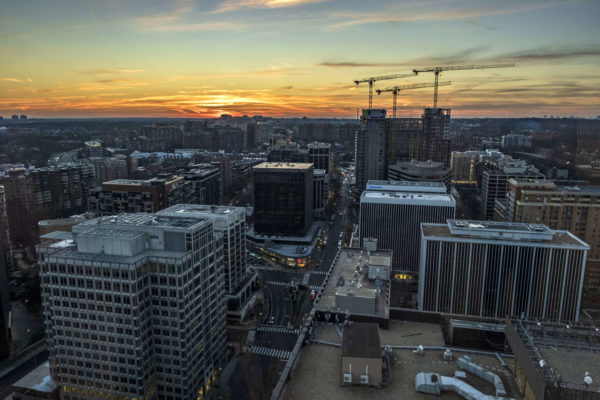 The pandemic has dealt a blow to Arlington’s economy, but the county may be well-positioned for a rebound rather quickly.

In a virtual panel discussion hosted by the Arlington Committee of 100 — the second of a two part series — local experts said that unlike past downturns that resulted in a lengthy recovery, this one is driven not by structural economic factors but by a virus.

As people are vaccinated and the pandemic recedes — whenever that may happen — expect a strong recovery.

“The economy right now is reacting to the health crisis and [that] is driving the recession,” said Jeanette Chapman, economist and director of the Stephen Fuller Institute at George Mason University. “This is not a normal recession.”

Due to the pandemic, consumer spending dropped significantly. Compared to this time last year, credit and debit card spending is down nearly a quarter in Arlington (less than D.C. comparably, which is down nearly 30%).

However, that is an improvement from early spring when spending overall was down about 50%.

As expected, the drop in spending was mostly concentrated in the transportation, apparel, hotel, and food service sectors. Grocery and food spending rose in 2020.

While job losses continues to be a concern, the Northern Virginia region is above the national average. Chapman says this is due to “mostly being a knowledge services economy and can send a bulk of workers home [to telework].” A big chunk of the job losses, as expected, are in the leisure and hospitality sector, accounting for nearly a third from November 2019 to November 2020.

In general, says Chapman, the losses regionally are skewed toward lower wage jobs. However, because this recession is due to a health crisis, Chapman says we can expect a near full recovery by 2022 due to the widespread availability of a vaccine. 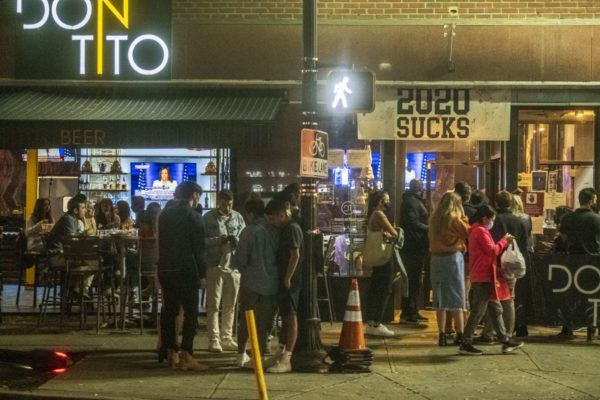 Telly Tucker, director of Arlington Economic Development, said that any business with fewer than 50 employees is defined as a “small business.” This encompasses about 90%, or 6,000, of the county’s businesses.

Over the last ten months, the county and the Commonwealth have implemented a variety of programs and grants. And it does seem to be helping, said Tucker.

Arlington’s small business emergency grant provided nearly 400 businesses with a combined $2.7 million. More than half of those businesses were woman and/or minority-owned.

As for bigger businesses, Tucker also spoke about how office building vacancy rates actually were decreasing going into 2020 from a high of over 20% in 2015.

While the vacancy rate has since risen and now sits at 16.3%, that remains below the office vacancy rates of the mid-2010s. Commercial real estate like office buildings are a major source of tax revenue for the county, Tucker noted.

What’s more, a number of large, multinational companies have made a home in Arlington over the last five years. This includes Microsoft, which made the announcement just last week that it would have a significant presence in Rosslyn.

The presence of Amazon and other major companies is likely to spur more job growth in Arlington, as is an expected rise in federal spending under the Biden administration.

The Arlington housing market, meanwhile, is doing well. Homes are typically selling for between 3% to 5% over listing price, noted Tucker, which is a positive sign.

“Many of the social programs [the county] offers through the health and human services department… the money generated from both our residential and business taxes helps to pay for those programs as well as keep our school system nationally ranked,” said Tucker.

He also said that the county is already in conversation about making it easier to convert some vacant office space into residential, particularly on Columbia Pike and Lee Highway (which could be soon renamed to Loving Avenue.)

Both Tucker and Kate Bates, president of Arlington Chamber of Commerce, spoke about how hard the hospitality community is being hit in Arlington.

While some businesses are able to have their employees telework, those workers are not leaving their offices for lunch at a nearby restaurant. “[Restaurants and retailers] depend on foot traffic,” said Bates.

Many local hotels have “near zero” occupancy, said Bates, and many were hoping for guests associated with next week’s inauguration — which is going to look very different this year.

This could impact real estate assessments, which will be mailed out this week, but Tucker said that hospitality “luckily only represents about 2% of land value in the county.”

Even within the hard-hit restaurant and retail sectors, there remains positivity. Before the pandemic, smaller businesses were recognizing the need to shift from exclusively relying on in-person business to conducting more transactions online.

“I think our retailers and restaurateurs are some of the most innovative and adaptable people I know,” said Bates. “So, I have all the confidence in the world in their ability to pivot to what best works for them.”

Another bit of good news: economists surveyed by the Wall Street Journal are revising their economic growth projections for the U.S. in 2021 up. The survey now expects 4.3% economic growth this year, up from 3.7% in last month’s survey.