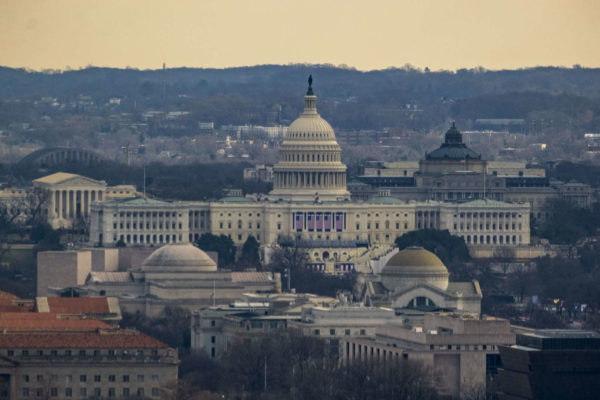 (Updated at 12:45 p.m.) Traffic is light. Police dispatches are run-of-the-mill. Many residents are at home, watching their televisions.

In contrast to the chaos of two weeks ago, Inauguration Day has been uneventful in Arlington.

Arlington County Police confirmed this morning that its officers are remaining in the county, not needed for the unprecedented security presence in D.C. Instead they remain in Arlington, albeit on high alert.

Arlington County Fire Department personnel are, however, supporting their counterparts in the District today.

“It’s an all hand kind of a day,” said ACFD spokesman Taylor Blunt.

Blunt said the fire department responded to a regional call for mutual aid from the D.C. fire department, which is supporting the inauguration. Firefighters from Arlington, along with other Virginia and Maryland fire departments, are helping to fill D.C. fire stations and respond to calls in the District.

It's 4am, and our crews are getting ready to provide support to @dcfireems for #InaugurationDay2021. We will be among the many public safety and military assets from across the country to assist on this historical day. pic.twitter.com/IoOEUKJ5Cd

The fire department also has “additional resources” active in the county, should anything happen here.

Arlington emergency personnel are monitoring the inauguration activities in the county’s Emergency Operations Center, ready to respond to threats and incidents as needed.

Greetings from your County Emergency Operations Center, where we are monitoring Inauguration Day activities.

Looking to stay informed about the event? Follow @ArlingtonAlert and get DC updates by texting INAUG2021 to 888-777. pic.twitter.com/4RS9APdz3A

At the U.S. Capitol, meanwhile, the American tradition of a transfer of power to the new administration is underway. Among those attending the inaugural ceremony is Arlington’s congressman, Rep. Don Beyer.

So excited to cheer on our next President @JoeBiden and Vice President @KamalaHarris!!! A great day for America. pic.twitter.com/gX60fmxBNt

The newly-sworn-in President and Vice President will briefly visit Arlington this afternoon, as they and several former presidents — the Obamas, the Clintons and the Bushes — lay a wreath at the Tomb of the Unknown Soldier at Arlington National Cemetery.

Biden, Harris and former presidents will lay a wreath at the Tomb of the Unknown Soldier at Arlington National Cemetery at 2:30 before a presidential escort to the White House at 3 p.m.

Memorial Bridge and much of the route there and back have been closed for days. pic.twitter.com/zuWS6wlmF8

Next
Arlington Pet of the Week: Kona