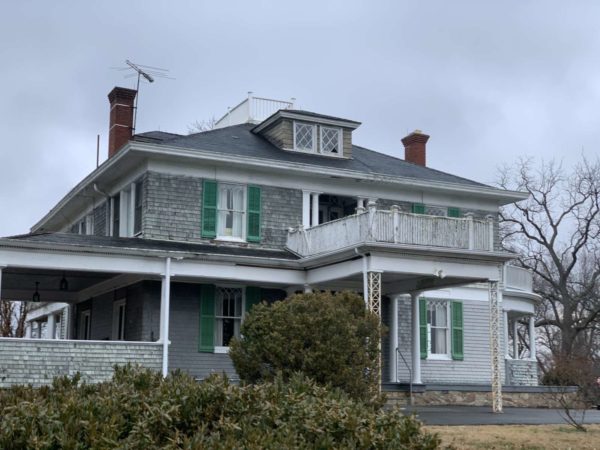 As a large Arlington estate nears a potential demolition, a local historic preservation group is fighting to have the estate’s main house saved.

The Febrey-Lothrop Estate — also known as the Rouse estate — is a 9-acre site at 6407 Wilson Blvd, near Arlington’s western border with Fairfax County. On it sits a more than 100-year-old home that has housed prominent business figures and celebrities over the years.

With a demolition permit application pending, a local nonprofit hopes that the county government can intervene and preserve the building.

“Over the past 150 years, the Febrey-Lothrop Estate has graced the Upton Hill neighborhood of Arlington,” the Arlington Historical Society (AHS) said in a letter recently sent to the County Board. “Despite war, twentieth-century alterations, and major development of the neighborhood, the manor home and grounds remain a proud, historically significant Arlington landmark.”

The original home on the property was built before the Civil War and once hosted a Union encampment and hospital. The property later became residence of Alvin Lothrop, co-founder of Woodward & Lothrop Department Store; Howard Hughes; and most recently businessman Randolph Rouse and his wife, Honeymooners actress Audrey Meadows.

According to an application for a historical district to protect the home from demolition, filed last year against the wishes of the estate of its late owner, the original home was destroyed and replaced by the current colonial revival-style house in 1907. The Arlington Historical Society, however, says portions of the original home and subsequent additions are likely still part of the building.

“Given the historical significance of the Febrey-Lothrop House, the Arlington Historical Society believes the property must be saved for future generations,” AHS said in the letter. “With requests for demolition permits already in the pipeline, AHS feels an urgent need to prevent harm coming to the Estate.”

The county has already listed the site for potential conversion into a public park in the Parks Master Plan (page 162), though so far it remains owned by Rouse’s estate. The historic district application notes that the property “is extremely attractive to developers for townhouse, condo, single family home, and retail commercial establishments,” due to its large size.

“Over the past 15 years, Arlington has lost many historically and architecturally important buildings to the wrecking ball,” AHS wrote in its letter to the County Board. “Let’s not let another gem go unprotected.”