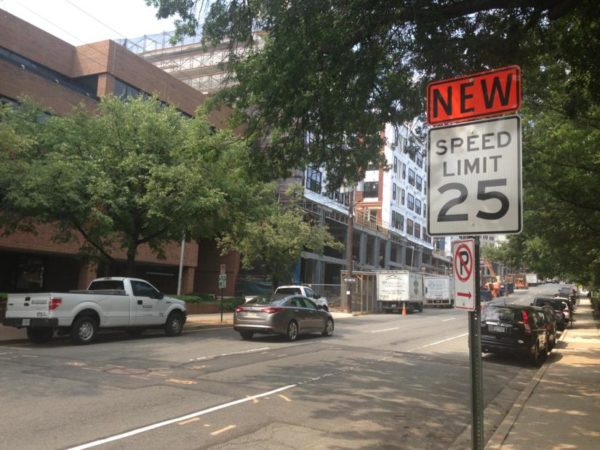 Arlington County will be soon implementing an additional $200 fine for speeding on eight mostly residential streets.

The additional fine was approved by the County Board last January, but it has taken a year to fully implement due to the need for collecting speed data, as well as pandemic-related installation delays. 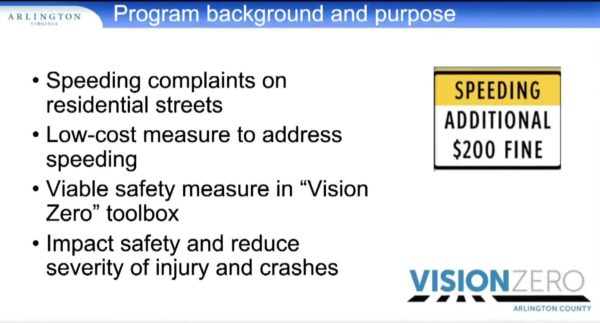 Signage is expected to go up over the next couple of months for the first four street segments, discussed at last night’s County Board meeting:

Then, come the spring, four more streets will receive signage and enforcement, according to the county Transportation Engineering and Operations Bureau Chief Hui Wang. They include:

All of these streets have a 25 mph speed limit, except for S. George Mason Drive from S. Dinwiddie Street to S. Four Mile Run Drive (which is 30 mph).

The eight new streets are in addition to those that were instituted early last year:

The installation of these signs began in February 2020 and was completed in April, in the midst of the pandemic.

The $200 fine is in addition to the standard $6 for every mile per hour above the speed limit and the $66 in court fees. So, for example, if a motorist is given a ticket for being 10 mph over the speed limit in one of these corridors, the fine would be $326.

Wang explained the corridors were chosen based on five years worth of data that showed a “documented speeding issue.” Those are mostly near residential, school, park, and other pedestrian-heavy areas.

She also said that this a relatively cheap method to deal with speeding.

There’s also potential for other coordiors to be chosen for this increased fine, but further data collection and analysis is ongoing.

Spurred by a question from County Board member Libby Garvey, Wang said that placards or warning flags are being considered for the new speed signs to ensure they are catching the attention of motorists. Those will be taken down after residents get used to the new fines and signs.

“Yeah, which may take a few fines,” said Garvey.