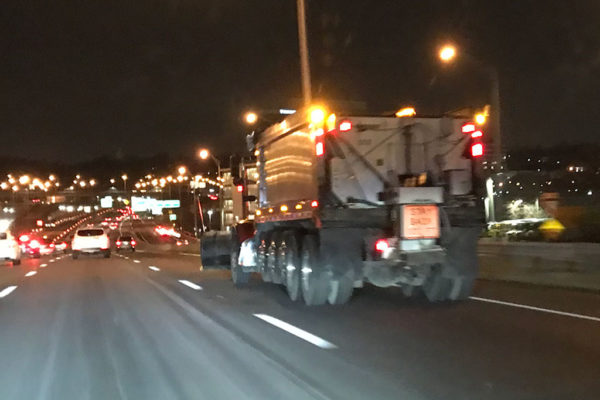 (Updated at 3:45 p.m.) Arlington is preparing for what could be the most snow the county and the region has seen in more than two years.

The region is likely to see at least 4-8 inches, with snow starting to fall Sunday morning, according to Capital Weather Gang. This afternoon, the National Weather Service issued a Winter Storm Watch for the region.

* WHAT…HEAVY SNOW POSSIBLE. POTENTIAL FOR 5 OR MORE INCHES OF SNOW.

* WHERE… THE DISTRICT OF COLUMBIA, AND PORTIONS OF CENTRAL AND SOUTHERN MARYLAND, CENTRAL AND NORTHERN VIRGINIA, AND THE EASTERN PANHANDLE OF WEST VIRGINIA.

* IMPACTS…TRAVEL COULD BE VERY DIFFICULT.

State and county agencies have already started preparing the roads for the wintery weather.

Arlington’s Dept. of Environmental Services tells ARLnow that they began pre-treating streets with brine — a salt and water mixture — yesterday.

That pre-treatment process is continuing today. Full deployment of the county’s snow plow teams will start early Sunday, a DES spokesperson says, with 92 drivers and 46 trucks equipped with salt spreaders and plows.

There will be staggered shifts the operations center due to COVID-19 protocols.

DES is asking residents to re-familiarize themselves with snow removal processes, which includes plowing only after snow depth hits at least two inches. In addition, they are requesting residents who park on narrow roads to put vehicles elsewhere so that plows can make their way through.

In fact, they are making a competition out of it and are asking folks to post pictures of their creative parking skills.

A number of major Arlington roads are maintained by the Virginia Department of Transportation, including Lee Highway, Arlington Blvd, Glebe Road, and others.

“The goal is for it to evaporate and leave the salt residue, those white brine lines,” she says. “Today is perfect to be doing it. People are going to be seeing them everywhere.”

She cautions that they often work in pairs, a tanker and a trailing vehicle, and move slowly. The crews make a lot of U-turns, she says, so drivers should avoid getting between them.

Kamilakis says that there are about 130 trucks deployed right now covering Arlington County and the interstates that cut through the county.

With the region having not seen snowfall like what is being predicted in a while, she says that residents may “not have their snow legs yet” and have forgotten what it’s like to drive in the snow.

Kamilakis cautions folks to monitor the forecast, drive carefully and slowly, and brake earlier. If VDOT puts out the call to stay off the roads, to do so.

“If we’re asking you to stay off the roads, it’s serious enough for us to ask that,” she said.

Another thing Arlington residents should take note of: the county’s snow removal ordinance, which requires that sidewalks be shoveled within 24 hours of the end of a snow event with six inches or less of accumulation, or 36 hours for storms that drop more than six inches.