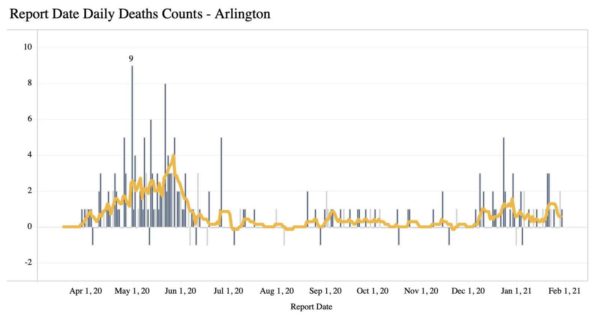 Two hundred people have died from COVID-19 in Arlington, according to the latest figures from the Virginia Dept. of Health.

One new fatality was reported today. Four have been reported over the past week. In all, 725 people have been hospitalized in Arlington as a result of a COVID-19 infection, according to VDH, out of 11,555 total confirmed cases.

The seven-day trailing average of cases has been rising this week, after hitting a one-month low of just over 67 cases per day on Sunday. The trailing average current stands at 78 daily cases.

Older residents and people of color have been overrepresented among the coronavirus deaths in Arlington. A demographic analysis of VDH data is below.

Three percent of deaths were among those of two or more races, or unknown race. Despite the grim milestone, the 200 reported coronavirus deaths represent less than 0.1% of the county’s population.

No deaths have been reported among Arlington residents under the age of 40. The ages of those who have died are below.

An additional 812 vaccine doses were reported as administered today, according to VDH, with 1,602 people now listed as fully vaccinated with two doses.

Arlington County officials have been urging state and federal authorities to speed up the distribution of additional doses, asserting that the county is prepared to administer up to 2,000 vaccine doses per day.