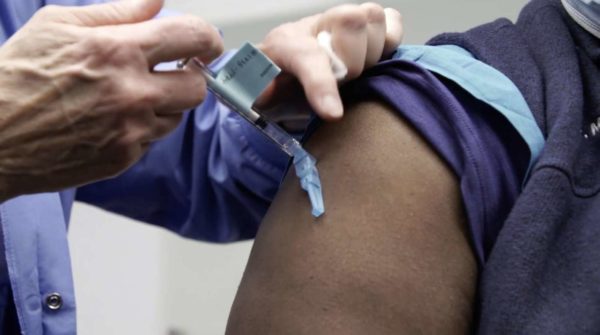 (Updated 4:30 p.m.) Arlington County officials are acknowledging the fear, anger and frustration people feel and are asking for patience as vaccine plans change.

During the County Board meeting on Saturday, board member Libby Garvey said the state and federal governments are “moving the goalposts, changing the rules and switching out equipment.” County Manager Mark Schwartz said that in the distribution process, “chaos is reigning.”

“I hear the pain and the upset and I don’t blame people for feeling that way,” Garvey later told ARLnow.

About 50% of Virginians are eligible for doses because of their age, job or health condition, but the state is telling local jurisdictions that it will take until March or April to get through this group unless the slow drip of supply from the federal government is sped up.

“There are simply not enough doses available yet for everyone who is eligible to receive them,” said Craig Fifer, a liaison on vaccines between the state and local governments.

During the Saturday County Board meeting, when the news that Virginia Hospital Center had to cancel thousands of appointments was still fresh, Board member Christian Dorsey mused that the county cannot solve the bigger problems, but it can explain them better.

“Maybe we can lean into our role of helping our community understand [the rollout],” he said.

Here’s what we know.

Who has been vaccinated?

According to the state vaccine dashboard, nearly 24,000 doses have been shipped to Arlington County but as of this week, only 7,850 of them have gone to Arlington Public Health Division. Some went to VHC and others are earmarked for the federal partnership with CVS and Walgreens to vaccinate long-term care residents.

Arlington County is not “holding onto the vaccine, except [to get] ready for the following week,” Arlington County’s Public Health Director Dr. Reuben Varghese said on Saturday. He said he saves about 10% of vaccines as a contingency until a new shipment comes.

Hudson said that the county’s public health division and VHC can together administer at least 2,000 doses per day, based on infrastructure, staff and preparation.

“We can do more if we were assured a greater supply of doses from Virginia,” he said.

Virginia is currently receiving approximately 105,000 new doses per week, a pace that could increase by 16% in the near future, said Fifer, who also serves as communications director for the City of Alexandria.

Like Arlington, the Commonwealth is seeing gaps between delivered and administered doses. The state has worked to close these gaps by redistributing doses, reducing data entry backlogs and accounting for the status of doses sent to CVS and Walgreens, Fifer said. About half of doses marked as received, but not administered, are earmarked for second doses.

About 50% of Virginia is currently eligible under Phase 1B, which Gov. Ralph Northam has expanded to those 65 and older and those younger than 65 with high-risk medical conditions.

Because there is not enough vaccine to get through everyone at once, Virginia has prescribed an order for essential workers:

People in qualifying age categories are being vaccinated concurrently. Expanding eligibility in 1B, however, has not corresponded to an increase in vaccines, which makes it “challenging for managing expectations,” Varghese said.

Arlington will be in Phase 1B longer than other jurisdictions because many local, state and federal government officials work here, he said.

When is it my turn?

In Arlington, childcare workers and educators from preschool through 12th grade are still invited to register and “keep looking at the calendar” for an appointment, Varghese said.

Arlington County is rescheduling canceled appointments that those 75 and older made with VHC, and others in this age range can preregister on the county’s website.

What happened to Virginia Hospital Center?

Arlington County and VHC had been unofficially working together to vaccinate people 75 and older at Walter Reed Community Center since Jan. 13. The County Board’s first opportunity to officially recognize the partnership, however, came last Saturday — one day after the state cut off shipments to hospitals due to shortages, prompting a temporary end to VHC’s role in vaccinating the public.

“I think that it was the right decision, but it has been difficult because we have different reporting mechanisms and different directions on whom we should vaccinate,” Garvey said of the county’s work with the hospital.

Since Saturday, staff members have been manually entering more than 3,000 sets of names and contact information from those whose vaccine appointments at VHC were cancelled into its management system. The manual entry is necessary because the system is finicky, said Aaron Miller, Arlington’s emergency management director.

Arlington County expects that when supplies increase, shipments to hospitals will begin again and another partnership with VHC can be formed.