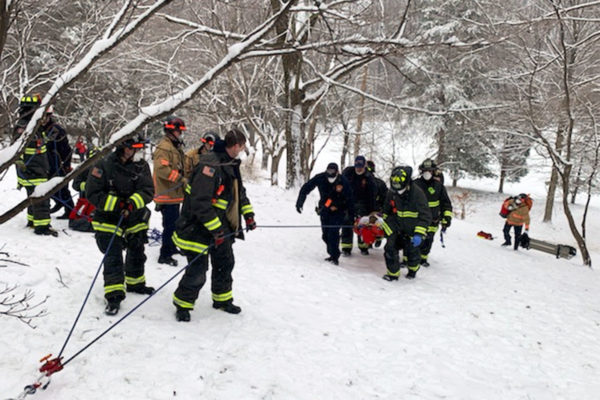 A relatively slow snow day for public safety personnel got busier this afternoon after a pair of significant emergency incidents occurred within 15 minutes of one another.

First, firefighters responded to the grounds of Missionhurst, a church facility near Marymount University, for a report of a 12-year-old who had suffered a head injury after sledding into a tree. The call was soon upgraded from a standard injury response to a technical rescue due to the terrain.

“At 1:59 p.m. we received a 911 call for a child that struck a tree while sledding at 4651 25th St N.,” said Arlington County Fire Department spokesperson Taylor Blunt. “Initial crews arrived within four minutes and requested the technical rescue team due to the patient’s location at the bottom of a snowy hill.”

“Crews provided initial treatment and used a haul system to move the immobilized patient up the hill to an ambulance,” Blunt continued. “The patient was transported to a local trauma center with non-life threatening injuries.”

Earlier this afternoon we responded to a sledding accident in the 4600blk of 25th St N. Our technical rescue team helped move the patient to a waiting ambulance. Thankfully, the patient suffered non-life threatening injuries and is in stable condition at a local hospital. pic.twitter.com/RZnFgiTXyW

Soon thereafter came another significant incident: someone at a gym in the Arlington Ridge Shopping Center near Crystal City had reportedly severed two fingers after getting them caught in exercise equipment.

“At 2:13 p.m. we received a 911 call at 2955 S. Glebe Road for a patient suffering from a partial amputation to their hand,” Blunt said. “Crews arrived within four minutes and provided bleeding control techniques to stabilize the injury. The patient was transported to a local trauma center in stable condition.”

The address corresponds to that of a Gold’s Gym and a chiropractic and physical therapy office.