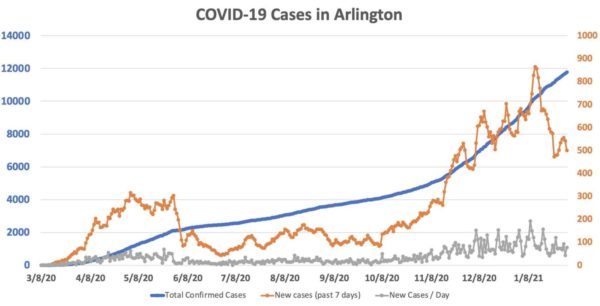 The coronavirus continues to circulate in Arlington, as vaccinations continue at a moderate pace.

The latest data from the Virginia Dept. of Health, as of Feb. 1, shows a pace of infections that is down from last month’s peak, but remains elevated compared to the relatively quiet summer and early fall.

The number of new daily cases was in the double digits each of the previous seven days; the last time that happened, without days reaching the triple digits, was early December.

“There is some good news on the COVID volume front,” he wrote. “The number of patients that we have in the hospital is down another 10% from last week. Our overall, hospital positivity rate is up a touch compared to last week but much lower than a few weeks. In the Emergency department, our COVID isolation numbers are down 10% or so as well.”

Silverman noted that vaccinations appear to be working — he’s unaware of any hospital staff more than 10 days out from their second vaccine dose that have tested positive for the virus — but the rate of vaccinations is much lower than public demand.

According to VDH data, an average of 638 vaccine doses per day have been administered in Arlington over the past week. Only 1,205 locals are reported to be fully vaccinated, though that data may exclude Arlington’s sizable population of federal employees and military personnel.

The county’s vaccination effort has been paused for the day due to weather conditions, but is set to resume Tuesday.

County officials have promised that Arlington has the capacity to do more vaccinations should it receive more supply from the state, which is itself constrained by vaccine supply from the federal government.

Despite the seemingly good news on a lower rate of cases, Silverman cautions that it is unlikely to last given viral mutations.

“Although things clearly look better now compared to 2 weeks ago, our numbers are not at the low levels that we saw over the summer and we’re expecting another surge in March because of the UK variant that may cause more significant disease,” he wrote. “And so, while I am in favor of trying to get schools reopened, it has to be done strategically, following best practice guidelines to insure student, staff, and community safety.”

Another word of caution from the emergency room: Silverman said he’s aware of “several” patients who tested positive around the holidays, and did not require hospitalization at the time, but recently had to come to the ER about a month after their initial diagnosis due to worsening symptoms. Normally, initial COVID-19 symptoms last one to two weeks.