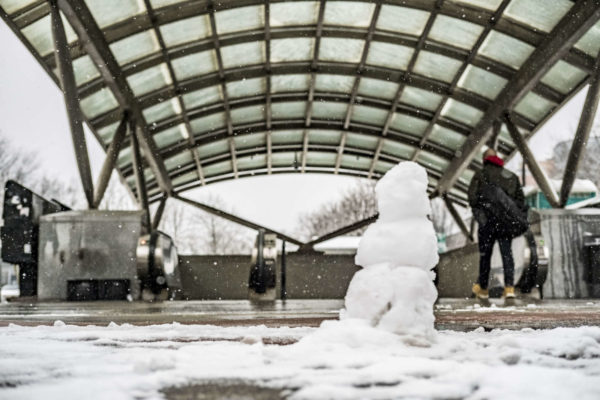 Metro on Modified Snow Plan — “On Monday, February 1, Metrobus will operate on a moderate snow plan. Service on some routes will be suspended and detours will be in effect on selected routes to avoid areas prone to hazardous conditions such as hilly terrain and narrow streets. Metrorail service is expected to operate on a regular weekday schedule.” [WMATA]

Arlington Vaccination Stats Might Be Higher — “Over 140,000 Northern Virginia residents have now received at least one dose of a COVID-19 vaccine, according to Virginia Department of Health data, but that does not include federal employees and current and retired military service members who may have received vaccines through the federal government.” [InsideNova]

Fallen Capitol Officer to Be Buried at ANC — Brian Sicknick, the U.S. Capitol Police officer killed during the Jan. 6 riots, will be lie in honor at the Capitol before being buried at Arlington National Cemetery. “Officer Brian Sicknick’s service and sacrifice will never be forgotten. These honors, accorded to few, are richly deserved by one who gave his life in defense of American democracy,” Rep. Don Beyer (D-Va.) said in a statement. [Press Release]

ACPD: Trespasser Kicked Officer — “Arriving officers observed the suspect outside the business, however, he began to flee on a bicycle. As the officers attempted to make contact with the suspect, he got off the bicycle and approached the officer’s cruiser. When the officer exited their cruiser, the suspect began to walk away and ignored lawful commands. The suspect was detained without further incident, however, while sitting on the curb, he became irate and kicked an officer.” [ACPD]

Recounting Presidential Visits to Arlington — “Which of our 46 presidents spent time in Arlington, before or during their tenures? Most, if not all, would have passed through during cross-Potomac travels, and in modern times most visited the Tomb of the Unknown Soldier and the Pentagon.” [Falls Church News-Press]

COVID Cases Among DCA Construction Crew — “The two-part, $650 million modernization of Reagan National Airport is still expected to be completed this year… While the health crisis hasn’t slowed construction, it has apparently affected the workers building the project. About 63 Project Journey workers have tested positive for Covid-19 since March, and most of those cases, 26, were discovered in December, according to MWAA.” [Washington Business Journal]

It’s February — Today is Feb. 1, the first day of February. Tomorrow is, of course, Groundhog Day.