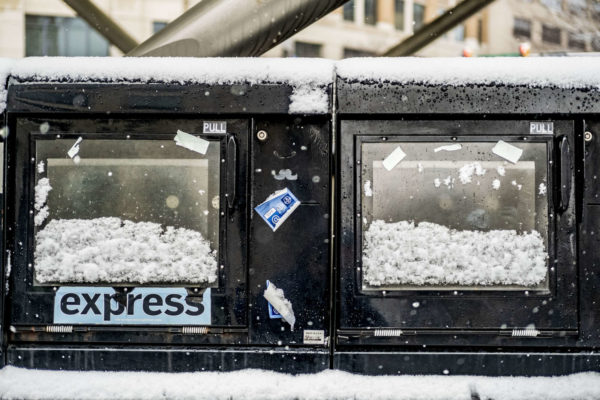 If you were to only count the couple of hours after the prediction in Arlington, the groundhog was spot on.

Arlington residents woke up to another snow globe scene outside of their windows, with flakes flying from a narrow band of snow that seemingly targeted the I-95 corridor.

As of 8:30 a.m., the National Weather Service reported that 2.4 inches of snow has accumulated in the county over the past 24 hours. NWS also extended the Winter Weather Advisory that covers Arlington through 1 p.m.

* WHAT…Snow. Additional snow accumulations of up to two inches.

* WHEN… Until 1 PM EST this afternoon.

* IMPACTS…Plan on slippery road conditions. The hazardous conditions could impact the morning commute.

When venturing outside, watch your first few steps taken on steps, sidewalks, and driveways, which could be icy and slippery, increasing your risk of a fall and injury.

Winter Weather Advisory remains in effect until 1 pm for the National Capitol Region, Baltimore metro area and surrounding suburbs. Periods of snow will continue into this afternoon causing slippery travel conditions. Winds gusting over 30 mph will drop wind chills into the teens

Across Arlington, plow crews largely kept pace with the falling snow. Most local roads remain wet, with only patches of snow.

“Crews continue to treat roadways this morning with hundreds of tons of salt but the weather still does its thing,” Arlington’s Dept. of Environmental Services said this morning on social media. “Avoid travel if possible. If not, go extra slow.”

Arlington’s schools are closed today in favor of all virtual learning. ART buses are running on a limited schedule due to the weather. More snow is possible throughout the day.

925a: Main snow band weakening and pushing south so immediate area to see it taper off a bit over next hour. But more snow showers possible on and off into tonight.
Update: https://t.co/rU0EAi1CWH pic.twitter.com/xav1M5IVZo

Kids are not the only ones enjoying playing in the snow. This morning, School Board member Barbara Kanninen posted a video of a playful fox frolicking through the snow in north Arlington.

A friend stopped by this morning. pic.twitter.com/ULZv7HdCX5