(Updated 4 p.m.) Officials with Arlington County Public Health Division say they are not wasting coronavirus vaccine doses, but they also do not condone people getting vaccinated out of turn.

During a COVID-19 work session on Tuesday, County Board members told health division staff that their constituents frequently express concerns about line-jumping by those who do not currently qualify for vaccinations under Virginia Dept. of Health’s Phase 1b guidelines.

“Everyone knows someone who isn’t in the 75-plus category or the personnel identified yet but got vaccinated because their eye doctor, brother or psychiatrist,” Board member Katie Cristol said, listing the kinds of connections that people are allegedly using.

Arlington County Public Health Director Dr. Reuben Varghese acknowledged those fears but said that, amid everything else that’s going on, officials do not have the capacity to verify these claims. Staff members do remove people from vaccine appointments if they notice something unusual, he said.

“I have to believe that Americans as a whole and residents in Arlington are going to be truthful and not line-jump,” Varghese said. “I know people are going to say ‘you’re being naive,’ but we don’t chip people and we don’t have a national health system that we can track people. The vast majority of people have done the right thing, and because of what we’re doing in Arlington, we don’t have the conditions where I think line-jumping is going to be as likely as other places.”

Meanwhile, total confirmed COVID-19 cases in the county have reached 11,867, with 61 new cases and three new hospitalizations as of this morning (Wednesday). The seven-day trailing average of new cases has fallen over the past few days, and currently stands at about 65 cases per day, after peaking at nearly 125 daily cases three weeks ago.

“This [wave] has doubled, if not more than doubled, what we’ve been seeing in the past,” Varghese said.

Last week, Jan. 24-30, about 6,500 tests turned up 482 positive results, said Aaron Miller, the county’s emergency management director. The test positivity rate remains at 7.5%, which is high compared to most of the pandemic, he said.

According to the Virginia Department of Health, Arlington County has received 26,725 vaccine doses. The newest shipment of 2,700 doses came Monday, for a total of 9,775 doses to the health division, compared to the 16,675 total doses that have gone to Virginia Hospital Center, County Manager Mark Schwartz said. He added the online dashboard might be off by about 200 doses.

The county is also starting to prepare for a new distribution method: Yesterday, the federal government announced it will start sending vaccines to select pharmacies next week.

Varghese also refuted the claim of wasted doses. Last week’s use rate — shown in the graphic below — was so close to 100% that it “pushed the envelope,” he said. Currently, he tries to reserve 10% for the start of the next week, as new shipments come either on Monday or Tuesday. 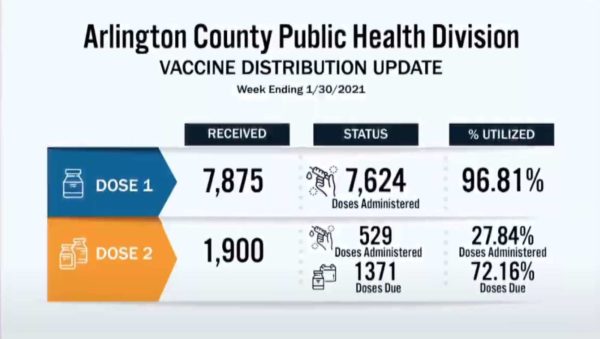 He said if vaccines are close to expiring, the county picks groups lower down the 1B prioritization list to vaccinate. That way, the county does not encourage loitering outside the clinic at 2100 Washington Blvd. or near grocery stores for chance doses, which “creates other problems,” he said.

This is the only group for whom the county is rescheduling appointments at this time, Varghese said.

Those who are 65 to 74 years old or 18 to 64 years old with high-risk medical conditions should pre-register with the county, regardless of whether they had appointments with VHC.

Once people arrive at the county’s clinic, at the Sequoia Plaza office complex near Route 50 and Washington Blvd, they are greeted by a team of volunteers and nurses. According to a behind-the-scenes video from the county, between 50% and 75% of the staff manning the vaccine clinics are volunteers.

“I know there are frustrating things going on across the country and even in Arlington, but I promise once you get here you’ll have a great experience, and you’ll help end the pandemic just by getting a vaccine,” said Dallas Smith, the site director for the Arlington County Vaccination Pod, in the video.