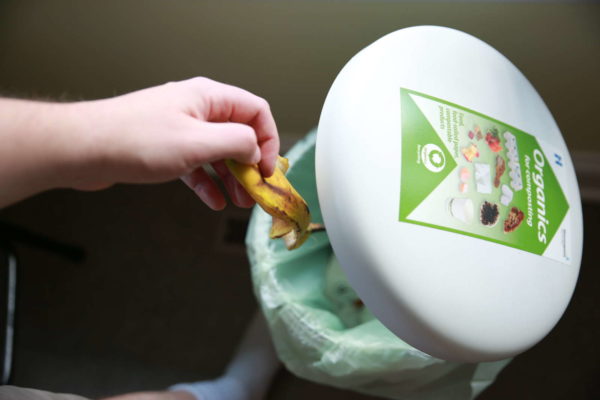 The Arlington County Board is going to consider adding food scraps collection to its solid waste services in the 2021-22 budget.

This change would allow residents to toss their food scraps with their yard waste in the existing green bins. All the organic material would be taken to a composting facility and the new service would cost less than $12 annually for those paying the household solid waste rate, according to county staff.

“We should have more information in the spring,” Dept. of Environmental Services spokeswoman Katie O’Brien told ARLnow in an email.

The county is mulling the move after being encouraged by positive community feedback. A majority of residents, surveyed in November and December, said they support mingling food scraps and yard waste. The survey garnered 3,973 respondents, of whom 79% supported the addition of food scraps to their organics carts, O’Brien said.

DES pushed out the feedback form to the household trash and recycling email list, which has about 27,575 people signed up for it, added DES spokeswoman Jessica Baxter.

“We believe there is a great support for the program — as evidenced by the feedback form and what we’ve heard through the years since introducing the green organics cart with year-round yard waste,” she said.

This potential service change would only be available to those who receive residential waste collection from the county — mostly people in single-family homes, as opposed to apartment and condo residents served by private waste haulers.

Currently, all county residents can drop off their scraps at Earth Products Recycling Yard in Shirlington (4300 29th Street S.) or the Columbia Pike Farmers Market on Sundays. The county also provides instructions for backyard composting.

Arlington’s quarterly trash audits have revealed that food scraps make up more than 20% of what residents throw out. According to the county’s website, collecting food scraps would support the county’s goal of diverting up to 90% of waste from incineration by 2038.

During the week, residents would collect their fruits, vegetables, meats and dairy in a countertop pail. Once the pail fills up, residents would place the scraps — bagged in paper or compostable bags — in their green organics cart and take it to the curb on trash pickup day.

To limit odors, staff recommend lining the pail with a bag, emptying it regularly and rinsing it occasionally. Freezing the scraps also reduces odors. Like the yard trimmings, food scraps will be brought to a permitted composting facility.