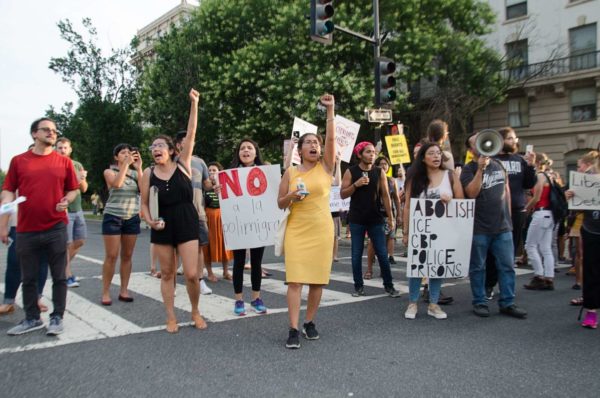 La ColectiVA said the effort comes after learning of multiple cases in which migrant community members have been arrested in Arlington and then transferred to ICE for deportation proceedings. Through public records requests, La ColectiVA found that the Arlington County Sheriff’s Office handed those in local law enforcement custody over to ICE more than 100 times in 22 months.

“This collaboration between violent state agencies violates the dignity of our loved ones and endangers our neighbors and families who are at risk,” the organization said in a statement.

From January 2019 to October 2020, the sheriff’s office — which runs the county jail — turned 104 inmates over to ICE, upon the federal agency’s request, while releasing 21 people despite an ICE detainer. In a fact sheet providing an overview of the data, the organization highlighted local policies governing work with ICE.

The sheriff’s office does not honor ICE requests — to detain a person for up to 48 hours — unless the detainer is signed by a judge, ACSO spokeswoman Maj. Tara Johnson said. Sheriff’s office employees are instructed to notify ICE when someone with a signed detainer request is being released from jail.

“If the individual has a release date, we can typically give [ICE] 48 hours notice of the person’s release,” Johnson said in an email. “In a bond situation, we would notify ICE that the person has posted bond and they have two hours to pick them up or they will be released.”

La ColectiVA said in one instance, one person was transferred from the Arlington jail to ICE after their family had already paid bail for their release.

Without knowing the specific case, Johnson said “it’s hard to answer but this [scenario] is possible,” She said the office is reviewing its policies, including its ICE policy, as part of an annual review.

The police department also transfers people to ICE custody, including an instance when an officer called the agency after “a fender bender,” La ColectiVA said.

“These are only two examples of policies and practices that create a chilling effect on many community members, inflicting fear and deterring individuals from participating in many community and government functions,” the organization said.

Police spokeswoman Ashley Savage connected the incident LaColectiVA cited to one that occurred in August 2019. Police responded to a vehicle crash at Columbia Pike and S. Buchanan Street, where they found one of the drivers did not have a license. When he provided identifying documents, officers conducted a routine check because they suspected the documents looked fake, Savage said in an email.

The background check identified the person as a deported felon, so police contacted ICE and he was taken into custody, she said.

Police officers can only notify ICE of a possibly undocumented person under five circumstances, including if the department’s gang unit confirms the person is suspected of participating in criminal street gang activity, Savage said.

“We know that officers will abuse their discretion and put community members at risk,” La ColectiVA asserted.

In response, Savage said law enforcement “has not and will not monitor, detain, interview, or investigate a person solely for the purpose of determining their immigration status.” She said that the police department works with the community to ensure people know that they can utilize police services, including reporting crimes, without worrying about officers checking their immigration status.

In a statement, County Board Chair Matt de Ferranti said that over the last year the Board has discussed individual cases causing “real concern” with La ColectiVA and other organizations and community leaders.

The police department and the County Board developed an immigration policy that states “it is not the role of Arlington County law enforcement to enforce immigration laws,” de Ferranti said.

Last month, the Fairfax County Board of Supervisors voted to create a policy that forbids law enforcement from sharing information with ICE.

For its project highlighting ICE collaboration in Arlington, La ColectiVA is working with the National Immigration Project of the National Lawyers Guild. The organization also launched a letter-writing campaign and received some support on Twitter.

For too long, @ArlingtonVA officials have said they care about migrant communities while funding policing, incarceration and maintaining collaboration with ICE, funneling our loved ones to ICE detention and deportation. No more words, it’s time to act. #ICEoutofArlington