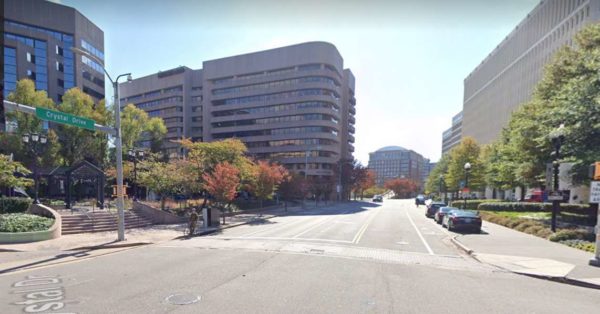 County staff has released its recommendations on how to improve Crystal City’s bike lane network.

In March 2020, the Arlington County Board directed staff to develop a plan to improve the bicycle network “east of Richmond Highway, from the Alexandria border extending north to Long Bridge Park.” The requirement for the proposal is that it needed to be completed within four years — by Dec. 31, 2024 — and require minimal changes to the curb line.

The broad goals, according to the county, were to improve safety, provide greater access to trails, improve connections, and reduce blocking of bike lanes.

“By providing additional protected and buffered bike lanes, the County can increase safety for people riding bikes while also addressing challenges like bike lane blocking,” Eric Balliet, spokesperson for Arlington’s Dept. of Environmental Services, wrote in an email. “The bike network will also support Crystal City as a multimodal hub by balancing the multiple needs of the streetscape, such as parking, pick-up/drop-off, and transit.”

Balliet noted that residents want safer connections to the nearby Mount Vernon and Potomac Yard trails.

Staff considered several other options, but those rejected either didn’t fully address safety issues, could not be completed in the four-year timeline, or substantial capital improvements would be needed. 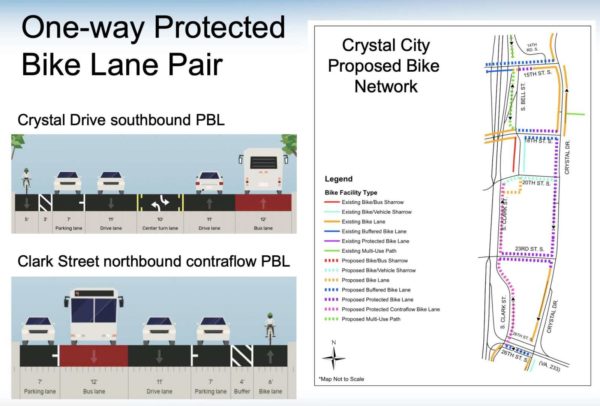 Not everyone thinks the recommendations go far enough. Darren Buck, who serves on Arlington’s Transportation Commission and lives in the Aurora Highlands neighborhood, said the recommendations reflect a “short-term view” that will not age well given that Crystal City in the midst of so much development.

“Let’s create a road map with a long-term vision, especially on Crystal Drive,” Buck says. “Let’s plan ahead with a 10 or 20 year goal for how that street should look.”

Right now, he says, gaps remain in the plan that doesn’t fully protect and provide safety to cyclists on all Crystal City streets, particularly from 18th Street to Clark and 27th streets.

For the county’s part, Balliet says that Crystal Drive has proven to be a challenge.

“There’s a fixed amount of space in which cyclists, pedestrians, transit, vehicles, emergency vehicles, and the needs of businesses all must be accommodated,” he writes.

Buck does say he’s “thrilled” to see the recommendations include a number of protected bike lanes.

“I have wanted to see a protected bike lane on that one single block of 18th Street that leads to the Mount Vernon Trail for years,” he says. “It is a big missing piece in our network and it’s just super exciting.”

He also cites the inclusion of east-west connections to 23rd Street and lanes on the block of 15th Street leading to Crystal Drive as another great step.

Members of the public will be able to share their thoughts on the recommendations on Wednesday, Feb. 24 at a virtual community meeting. A second public engagement meeting will be held in the spring.

Public feedback will be incorporated into the development of a “preferred alternative” plan, says Balliet.