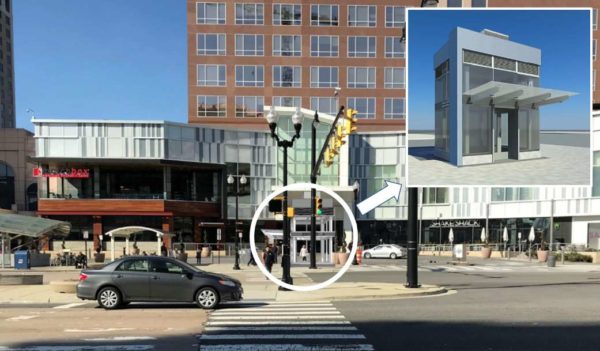 The Pentagon City Metro station is getting a second elevator.

On Saturday, the Arlington County Board voted to award a contract to W. M. Schlosser Company for the construction of a second station elevator on the west side of S. Hayes Street, near the Fashion Centre at Pentagon City mall.

Designs for the elevator were first approved early last year and the contract for managing the construction was approved this past summer.

The second elevator will eliminate the need for pedestrians to cross six lanes of traffic on S. Hayes Street, two parking lanes, and a bike lane to reach the one elevator currently in operation on the other side of S. Hayes Street, near the Pentagon Centre shopping center.

“For those with mobility issues, this is a big step forward so that we can serve everyone well,” said County Board Chair Matt de Ferranti at the meeting.

Construction is expected to start in the spring and be completed within a year, by spring 2022.

The Maryland-based W. M. Schlosser Company previously was awarded the contract to rehabilitate Arlington House in 2018 and completed streetscape projects for the county in Crystal City and Potomac Yard.

The total cost of the elevator contract is about $6.5 million, which actually exceeded the initial estimate by about double. Changing market conditions and the risks involved with such a complex project are “likely reasons” for the higher costs, according to Arlington Dept. of Environmental Services spokesperson Eric Balliet.

The Pentagon City Metro station has one of the highest riderships in Northern Virginia, according to the staff report. The station averaged about 12,500 entering riders in 2019, though that number has been cut by more than two thirds in 2020 due to the pandemic.

The elevator will add to the two escalators that already lead to the station at street level on the west site of S. Hayes Street.

“Providing entry to the station from the west side of South Hayes Street improves ADA access as well as access for passengers with strollers and luggage,” reads the report.

Additionally, it will provide redundancy if — or when — one of the elevators goes out of service for any reason.

The County approved this item as part of its consent agenda, meaning it was non-controversial and was acted upon by a single vote. The County Board also approved, as part of the consent agenda, an increase in the contract for the eventual inspection of the elevator’s construction.

The Pentagon City Metro is also getting four new escalators as part of a $179-million, seven-year system-wide project to replace and install new heavy-duty escalators. That project will begin in May.