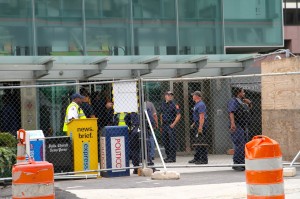 (Updated at 1:50 p.m.) About a dozen commuters were trapped in an elevator for 20 minutes at the Rosslyn Metro station during rush hour Thursday morning.

One of the three high-speed elevators on N. Moore Street — which are less than a year old — broke down about 8:15 a.m., according to scanner traffic.

A commuter who was rushing to work after being freed from the elevator said the group remained calm as they waited for help.

The entrapment was caused by a power surge that is under investigation, WMATA spokeswoman Caroline Laurin said.

The elevators, designed and built by the Arlington Department of Environmental Services as part of a $50 million project, went into use in October 2013, when the new station entrance opened.

The elevators went out of service in December 2013 because of an electricity-related glitch.

All three of the elevators on N. Moore Street were taken out of service after the incident and had resumed operation by 11:15 a.m., the WMATA representative said.

DES spokesman Eric Balliet said authority over the Rosslyn station elevators was transferred from the county to WMATA about a month ago.