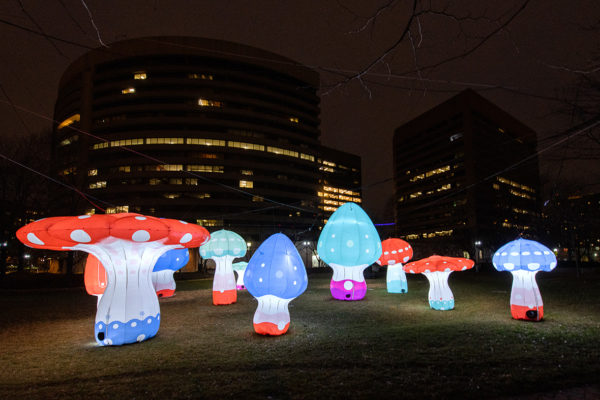 A new mushroom-inspired art installation has sprouted up in Crystal City.

The art went on display this past Friday, in a grassy area that is slated to be redeveloped into a new office building. It is sponsored by the National Landing Business Improvement District.

Dubbed “The Shrooms,” the installation is the work of Australian light and design studio Amigo & Amigo. With its contrasting fabrics, the work encourages “our social nature while contrasting with urban environments,” the BID said in a press release.

It was originally created for an art festival in Sydney last year and will be lit up both day and night.

The Shrooms is part of the BID’s winter-long “Turn Up the Love” campaign, which has featured several outdoor pop-up art installations over the last few months.

“In National Landing, we are constantly looking for creative ways to activate our public spaces and create fun, uplifting experiences for those who live in and visit our community,” Tracy Sayegh Gabriel, National Landing BID’s President and Executive Director, told ARLnow. “In many cultures, mushrooms are considered a symbol of luck, so ‘The Shrooms’ felt like a fitting installation as our neighborhood continues its exciting transformation and we work towards a bright future.

Previous “Turn Up the Love” installations include a large boombox adorned with thousands of colorful ornaments for the holidays and three sharable photo frames.

Also part of this campaign and currently on display is a life-size cutout of a pink Volkswagen Beetle outside of Commonwealth Joe’s at 520 12th Street S., about a half-mile walk from the Shrooms. That was installed on Valentine’s Day and will be there until Friday, March 12.