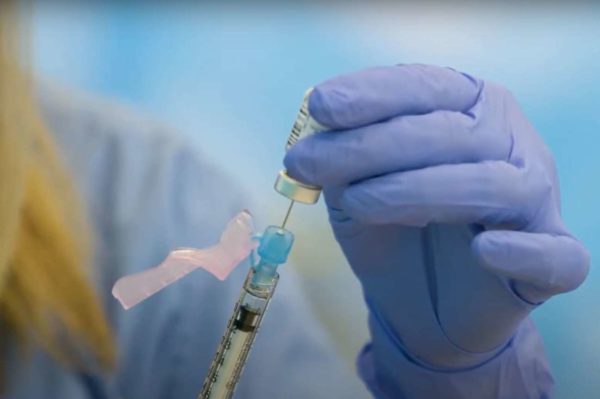 For those Arlingtonians still waiting to get their vaccination, the list of options for getting it is growing.

While getting vaccinated through the county remains an option for all currently eligible groups, residents 65 and older have a lengthening list of stores at which they can receive the vaccine.

At this time, exact locations are only known for Giant and Safeway.

Appointments remain hard to come by, however, even as the one-dose Johnson & Johnson begins to roll out. Vaccine supply in the state remains limited, though it’s increasing.

The Virginia Department of Health tells ARLnow that more than 80,000 doses are being given to retail pharmacies statewide — an increase from last month.

The 69,000 J&J vaccine doses announced last week started coming in yesterday, VDH confirms, and clinics across the state are expecting to start using it today (Friday). Arlington is planning to vaccinate 1,500 people at a mass vaccination clinic at the Lubber Run Community Center tomorrow.

Virginia and Arlington County are both currently in Phase 1b, meaning those 65 or over and those with 16 to 64 with underlying medical conditions are eligible to receive the vaccine.

Statewide, it’s estimated that up to half of the population is currently eligible for the vaccine. Around 27,500 Arlingtonians have received at least one dose, per VDH data.

The challenges for retail pharmacies are the same as for localities: demand is still far outpacing supply.

Last month, CVS began offering vaccine appointments at its local stores for those 65 or over. Currently, 41 CVS pharmacies are offering the vaccine in Virginia with appointments booked through their website.

However, there’s only one location in Arlington (an exact address is not provided) and, at last check, appointments are “fully booked.”

Most of them are using the Moderna vaccine.

“In most (if not all) states, the number of individuals who are eligible to receive the vaccine under the state’s rules far outnumber the state’s available doses,” Thibault said.

She also noted that CVS is receiving a “one-time allocation” of 212,000 doses of the Johnson & Johnson vaccine this week which will be spread across their stores in 17 states.

Scheduling for that began Thursday on the CVS website and administering begins today.

The two Arlington Giant locations are also offering vaccines to those 65 or over, but no appointments are currently available either according to the grocery chain’s online scheduler.

Giant spokesperson Daniel Wolk tells ARLnow the number of appointments depends on the vaccine doses received and can fluctuate.

“The number is changing daily based on the total amount sent to us,” he writes. “We hope to increase the appointments as time goes by but it all depends on how much vaccine we receive.”

The grocery store, and its parent company Albertsons, are also offering appointments to those 65 and over at four local locations. According to their online scheduler, the one-dose Johnson & Johnson vaccine is now being offered.

But, going through the online scheduler, no appointments are currently available at least through March 13 at any of them.

“Demand is high and appointments are often claimed very quickly,” Albertsons spokesperson Andrew Whelan tells ARLnow. “As dose allocations increase, so too will the opportunity to secure an appointment.”

Walgreens announced its participation in the federal partnership and started administering vaccines in Virginia. But, at least as of March 4, there are no appointments available within 25 miles of Arlington in the next three days. 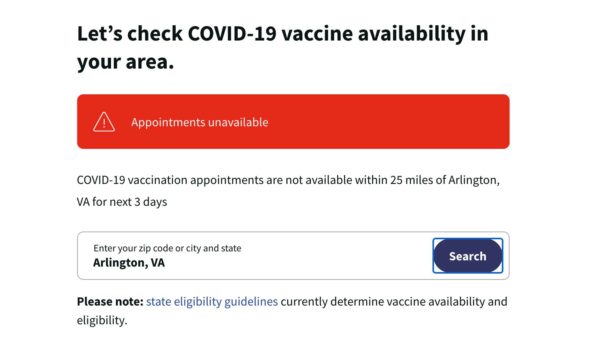 Harris Teeter’s website notes that they were to start distributing vaccines this week in Virginia, but a company spokesperson says that hasn’t happened yet.

“Harris Teeter is expected to receive limited quantities of the vaccines soon at nine pharmacies in and around Northern Virginia… appointments will be released as vaccine allocations arrive,” the spokesperson said.