Arlington County police are investigating the theft of a Black Lives Matter sign from a home near Rosslyn.

The theft was reported Saturday on the 2000 block of 20th Road N., in Arlington’s North Highlands neighborhood.

“On March 20, police received an online report of a larceny,” according to an ACPD crime report. “The report stated that at approximately 12:18 a.m. on March 20, the unknown suspects entered the victim’s driveway and stole a Black Lives Matter sign from the front yard.”

The homeowner, Jennifer Herrera, tells ARLnow that the theft — which was caught on the home’s video surveillance system — is part of a recent pattern.

“[There have been] other instances from neighbors of signs being stolen,” she said. “Our next door neighbors had their sign stolen and their cars keyed. Another family walked by my house recently and their child pointed to my BLM sign and asked his mother if that was their sign and the mother replied ‘no, our sign was stolen.’ When I realized our sign was missing, I walked around the block and noticed houses that had a BLM sign in their yard the previous day, no longer had them.”

The county has also seen the repeated vandalism of Black Lives Matter and other racial justice signs at local churches.

Herrera points out that, in the video, one of the suspects asks “what’s the number?” while the other appears to read a street address from their phone. That, she said, seems to point to an organized effort to steal the signs.

“The most disturbing point of all of this is that it seems to be an organized, purposeful effort,” she told ARLnow. “A car was dropping off and picking up these individuals to steal the signs and possibly key cars in our neighborhood.”

Herrera said the pair appeared to be young adults. She hopes her video can help “uncover any organized, nefarious… activity happening in Arlington.”

Police provided an additional description of the suspects in the crime report. 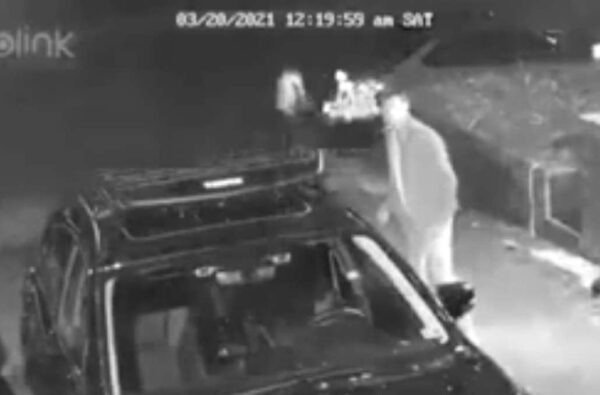