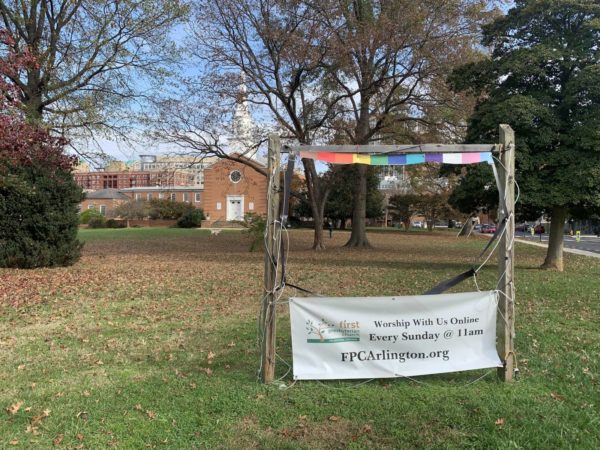 Not once, not twice, but four times, vandals have targeted a Black Lives Matter sign in front of the First Presbyterian Church of Arlington near Ballston.

Church officials were first alerted of the vandalism on Saturday morning, and presume that the destruction occurred overnight.

“It’s been a rocky history at this point,” said Scott LaGanga, an elder at the church, which is located at 601 N. Vermont Street in the Bluemont neighborhood.

First Presbyterian is at least the fourth church in Arlington reported to have a racial-justice sign vandalized this year.

The church has gone through four signs since one first went up on Oct. 4, LaGanga said. The sign read “Black Lives Matter” on a striped background imitating the Philadelphia Pride flag, which includes the colors for Gay Pride and Trans-rights flags as well as black and brown stripes to symbolize people of color.

“They’re clearly doing it in the dark because they have a certain viewpoint and don’t want to share that they have it,” LaGanga said.

After the first sign was stolen, the church invested in steel cables to secure it. Instead, vandals covered it in graffiti. Once, they crossed out the “V” in “Black Lives Matter” to read “Black Lies Matter,” LaGanga said.

This time, someone cut the sign out of the cables and took it.

LaGanga explained that the church has been more engaged in issues of racial justice, putting up signs and hosting a weekly outdoor vigil for an end to racial injustice. Acts of vandalism will not shaken the resolve of the church, he said.

“The church has taken a strong position on inclusion and racial justice,” said LaGanga. “It reaffirms the stance we are taking and the reason we’re going to replace the sign.” 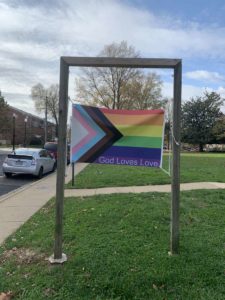 This time, LaGanga said the church is considering security cameras, which he hopes will catch whoever is targeting the sign.

“We’re so resolved that if someone wants to do it, they’ll do it on camera,” he said.

First Presbyterian has received strong support from people in the community, many of whom are neighbors but not members, LaGanga said.

“We were surprised in the uptick in support from others in the community who were upset by this,” he said.

The first time, the church submitted a police report, but LaGanga does not see much point in submitting more since there have been no leads to date on the vandal.

In the wake of the protests sparked by the police killing of George Floyd this summer, a rash of church signs were vandalized. Black Lives Matter sign were vandalized at Rock Spring Congregational church and at St. George’s Episcopal Church as well as a racial justice sign was vandalized outside of Clarendon United Methodist Church.

Acts of vandalism against BLM signage also occurred in secular spaces this summer, including S. Abingdon Street bridge over I-395.

Next
How To Keep Your Skin Glowing While Wearing a Mask