Courthouse-based startup WireWheel is gearing up to bring its software to more mid- and small-sized companies looking to comply with new data privacy laws being passed in the U.S.

And the startup, located at 1310 N. Courthouse Road, recently raised $20 million in funding, led by ForgePoint Capital, to make that expansion happen.

“We raised our financing with a terrific investor out of Silicon Valley that helps companies build out and sell products,” said co-founder and CEO Justin Antonipillai. 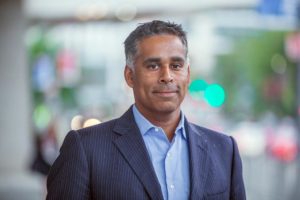 Founded in 2016, WireWheel provides companies with the infrastructure needed to show customers what data they collect on customers and how that data is used. These platforms also help customers access or delete this data or indicate they do not want their data sold.

“People are getting creeped out by the idea that you go to a website and then you start seeing ads everywhere,” Antonipillai said.

Antonipillai, the former Acting Undersecretary of Economic Affairs at the U.S. Department of Commerce under President Barack Obama, predicts this infrastructure will become more crucial in the near-term. In the coming year, he said between five and 10 states are poised to pass laws on data privacy, following the lead of California and Virginia.

While each state’s law may look different, he said, they generally will require companies to be more transparent with users and potential auditors about the data they collect and whether and to whom they sell that sensitive information.

“Every company you know is worried about a simple problem: How do I make sure my marketing and website are complying with laws?” he said. “We help companies solve that problem.”

California rang in 2020 with the first major data privacy law and Virginia passed the second this year, he said. Arlington and Northern Virginia’s robust cybersecurity industries likely contributed to this push, he added.

WireWheel first targeted a handful of big-brand companies, and this year, made its essential offerings available to companies of all sizes, Antonipillai said. This includes a product that helps new companies weave law-abiding data privacy into their websites and platforms as they build them.

It recently launched a data privacy conference called Spokes that has quickly become the largest such conference in the world, attracting business and government leaders from Europe and the US, he said. That trans-Atlantic collaboration is important because Europe has considered shutting down data-sharing operations because the US had fewer regulations on data privacy, he said.

“You don’t really think of data as something that a group of countries could stop but the truth is that it can be,” he said.

Although data-sharing, with the lack of privacy regulations, poses problems now, it can be a powerful tool for good, he said. Antonipillai imagines WireWheel helping usher in a world in which consumers actually trust the government or a company to use data responsibly and delete their identifying information if they wish.

“If I felt more comfortable with that, I would let more companies and governments use my data to solve big problems,” he said.

One example is in healthcare, where patients could permit their information to be shared anonymously with researchers for further study or with organizations, such as cancer societies, so newly diagnosed individuals can learn more about their chances for survival and remission, and what lifestyle changes they can make to improve their chances.

“Those are the kinds of things where a lot of people want to help, but don’t trust healthcare data will be protected and used the right way,” he said.