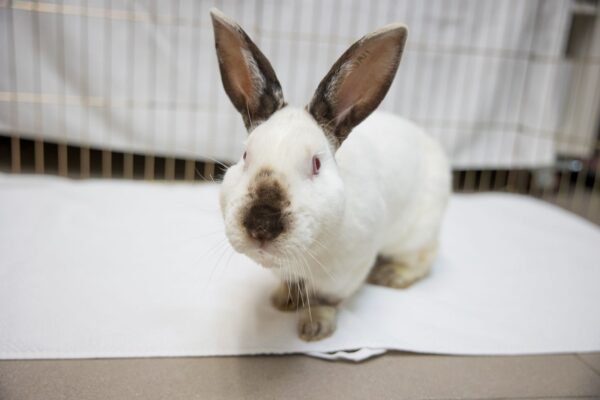 The Animal Welfare League of Arlington is overflowing with a whole warren’s worth of adoptable rabbits.

From tiny bonded-babies Bugs and Buster Bunny to the surprisingly large Katie, the shelter has pretty recently found itself with a deluge of rabbits in every shape and size.

Chelsea Jones, senior communications specialist for the Animal Welfare League of Arlington, said the shelter has eight rabbits currently up for adoption. Jones said there’s no particular reason for the increase, just “luck of the draw” — which makes sense considering that’s 32 lucky feet.

The search for a new home for the rabbits comes as Jones said an adoption surge that started at the beginning of the pandemic starts to wind down.

“At the beginning of 2020 they were going faster than usual, but that’s slowed down a little bit as people start going back to work,” Jones said. “But smaller animals: guinea pigs, rabbits, rats — they’re still going quicker [than before].”

Rabbits have been particularly popular adoptions over the last year, Jones said, because they make perfect quarantine companions, provided the owner can spend time with them and bunny-proof the house.

“Anyone can have a rabbit, really,” Jones said. “They’re such a wonderful pet to own. We do want to make sure that people know having a rabbit isn’t like having a hamster or a pet mouse. Rabbits require a lot of time with their people, just like a dog or cat.”

Jones said it can be harder to find a home for the larger, more cat or dog-sized rabbits like Katie, who stay in the shelter longer as adopters come in with the more traditional, smaller rabbit in mind.

One of the concerns in the rabbit community is that families will adopt rabbits around Easter without taking the time to appreciate or understand the requirements behind them, but Jones said they haven’t found this to be the case at AWLA.

“The good thing is: our shelter has never had an issue with someone just adopting a rabbit for Easter,” Jones said. “It’s a little bit of a… we call them shelter myths. There’s a lot of fear around certain subjects, like rabbits at Easter or black cats at Halloween, but there’s not a lot of data to back up that it happens more around Easter.”

One recommendation Jones does make is that parents should not go into adopting a rabbit thinking it will make a great first pet for a child because it’s small.

“We tell parents: a pet for kids is really a pet for you,” Jones said. “Make sure you want the rabbit as well. And in talking to kids, depending on the age, you have to tell them to be gentle with the rabbit and what to expect in their behavior. Kids want to cuddle and pet it, but that’s not always what a rabbit wants.”

For those who invest in their rabbit, though, the results can be rewarding in a way that’s different from affection from a cat or dog.

“They are not a predator animal,” Jones said. “We’re so used to living with predators, like cats and dogs, but people forget an animal like a rabbit is a prey animal. They behave and interact differently. When you first get that sign of affection, it’s so rewarding. They can be affectionate and snuggly, but with a rabbit you have to work for it. Once they get comfortable, they have amazing personalities.”

A full list of small, adoptable mammals — including rabbits — is available online with potential adopters able to schedule meet-and-greets with the pets.

END_OF_DOCUMENT_TOKEN_TO_BE_REPLACED

More Stories
Photos: Spring is Here as Blossoms Bloom Across ArlingtonAsk Eli: The Cost of Land in Arlington