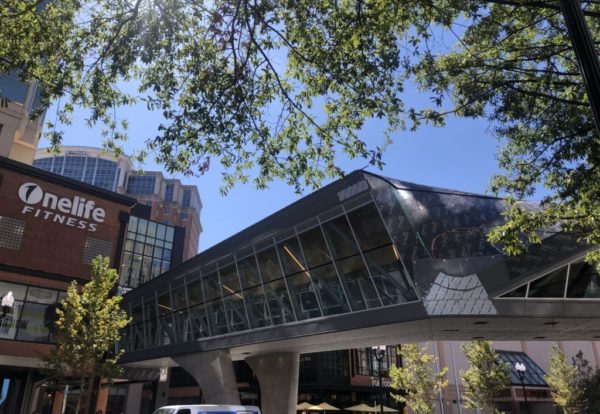 A pair of Arlington projects recently received national recognition for their unique design and use of steel.

The Top Steel Design Awards recognize — as the name might suggest — building architecture that incorporates steel in interesting and distinct ways.

The Merit Award went to the Ballston Quarter Pedestrian Walkway, which opened in 2019 after the original bridge was torn down in 2017. A judge in the Top Steel Design Awards credited the choice of frame and the walkway’s “visually captivating” quality.

“The crossover segment at mid-span creatively addresses the offset entrances of the connected buildings, and the steel HSS frame is an ideal choice to resist the complex forces of this innovative bridge design,” Stephanie Hautzinger, associate vice president of  CannonDesign in Chicago, said in a press release. “The resulting structure has a sculptural quality that is visually captivating from both the exterior and interior.”

The project was designed by studioTECHNE architects in Cleveland.

A new Arlington Public School building was also among the ten winning projects from across the U.S., which were categorized by overall cost. The Heights, the new home to H-B Woodlawn and the Stratford Program at 1601 Wilson Blvd in Rosslyn, won the top award for the $75-200 million category.

The school was designed by the Bjarke Ingels Group in Brooklyn and Leo A Daly in D.C.

Judges praised the unique structure of the building.

“The ambiguity of how this building is supported is one of the most fascinating features of the structure, and it is all due to the structural steel trusses behind the scene,” said Maysa Kantner, a structural steel specialist, in the press release. “Coordination and communication are required on every project but I imagine for this level of uniqueness, those two things had to be stepped up in a big way. It is so great to see what can be done with project teams when they all work together and think outside the typical box-shaped buildings!”