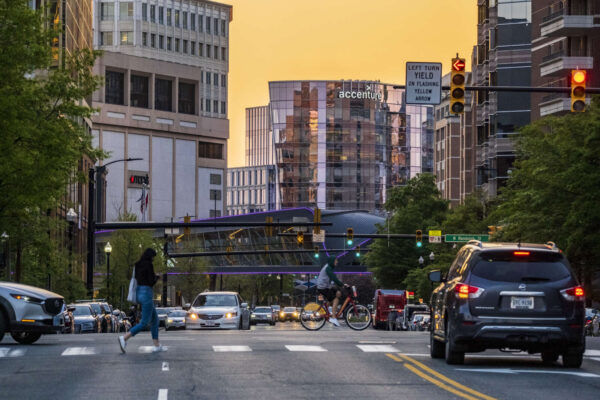 Rosslyn Resident Makes Big Donation to UNC — “The University of North Carolina at Pembroke… has received a $6 million planned gift — the second largest in the university’s history — from former trustee Mary Ann Elliott to name the McKenzie-Elliott School of Nursing.” Elliott is a Rosslyn resident and former aerospace executive. [Yahoo]

Thursday Is Earth Day — “It might be easy to overlook Earth Day this time around, even in Arlington. Vaccine progress indicates better days ahead; in-person classes are returning; the air is visibly cleaner, and winter failed to freeze growth in bike sales and trail use. But Earth Day, April 22, has always offered a good pause to note long-term progress and dig below the surface. Just ask the periodical cicadas, due to reappear any moment after 17 years of silence.” [Arlington County]

History of the Pentagon’s Waterfront — “Today it’s home to the Pentagon, but around the turn of the 20th century, the riverfront area just north of National Landing was a seedy district known as Jackson City. A haven for drinkers, gamblers and daredevils, its attractions included, among other things, a half-mile-long racetrack near the foot of the 14th Street Bridge used for horse racing, and later, drag racing. Some even referred to it as a ‘Miniature Monte Carlo.'” [Arlington Magazine]