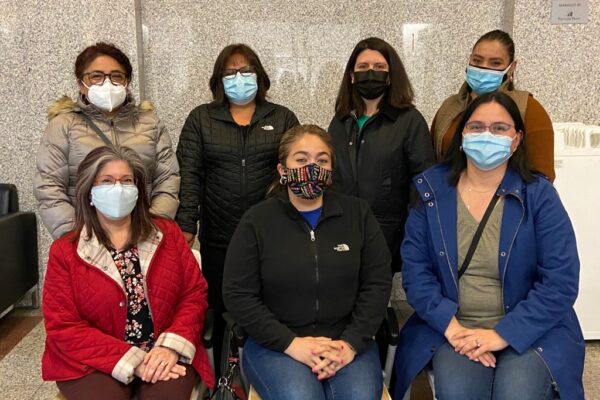 A group of Arlingtonians has worked nights and weekends to sign up nearly 2,000 members of local immigrant communities for the COVID-19 vaccine.

And the team, called the Arlington Schools Hispanic Parents Association, only advertised its services twice: once in March, when the group decided to get involved, and once when eligibility expanded to all Virginians 16 and older.

Word spread by mouth, text and through small social networks among mostly Spanish-speaking communities in Arlington.

“For the first couple of weeks, we were overwhelmed,” said ASHPA member (and former Arlington School Board member) Tannia Talento. “In the last two weeks, it has settled down. But now that it’s open to the public, we expect a second rush.”

Talento and Janeth Valenzuela started ASHPA in 2016 with two other women to address the communication gap among the county, the school system, and Spanish-speaking and other immigrant households. During the pandemic, the group pivoted to focusing on weekly food distributions, rent support, mental health education and now, registering people for vaccine appointments through the community health center, Neighborhood Health.

“I’m very proud of my team,” Valenzuela said. “We want to help our community get vaccinated.”

It has been almost two weeks since anyone 16 and older officially became eligible to get a shot and the number of vaccinated people continues to rise in Arlington County —  more than 68,000 people in Arlington are fully vaccinated as of today, according to the Virginia Dept. of Health.

Now that the vaccine is widely available, focus has shifted to getting those hesitant to get the vaccine — or unable to get it for other reasons — into vaccination clinics.

Talento and Valenzuela said they did encounter vaccine hesitancy in February and March but the bigger hurdles they face involve access. They worry that hesitancy is used to gloss over these other, surmountable barriers.

“In the beginning, it was difficult. Most of the population did not want the vaccine,” Valenzuela said. “It’s part of the culture in third-world countries to talk bad about vaccines. We had to work with that and let them know the vaccine is something to open the economy in this country and get back the life they had.”

But when hesitant folks saw their community leaders get vaccinated, they changed their minds, she said. A few skeptical community members do remain, however, she noted.

Talento said she spends more time helping people access the vaccine than convincing them it is safe to take. Some did not think they were eligible back in February, even though they were.

People cleaned facilities but did not have the title “janitor” or worked in a food market — but not a big-box store such as Giant — and didn’t think of themselves as “grocery workers.”

“We were like cultural brokers,” Talento said. “I know there’s hesitancy, but sometimes I worry that’s being used to explain why our community is not getting vaccinated. That’s not true.”

She said the barriers of language, technology and time play a more significant role. Many do not have email or use it regularly, or cannot fill out a form in English, work hours that prevent them from spending the time troubleshooting registration problems with customer service.

And that is where ASHPA and the community health center Neighborhood Health decided to come together.

This is why our community health center (#FQHC) is partnering with trusted community and faith based organizations to refer people to us for Covid vaccines and why we have set up our vaccine clinics in and near the communities where our patients live. #ValueCHCs #equity https://t.co/TjH4Ks94GZ

ASHPA compiled people’s health information and sent it to Neighborhood Health, which called them within 10 days to set up an appointment. The group kept track of those who did not get a call and had Neighborhood Health follow up. Together, they discovered calls went unanswered when people were at work, so members took calls late at night and on weekends.

“No matter what time, their call is important to us,” Valenzuela said.

Sometimes, Talento said, it feels like ASHPA has made little progress, as gaps in accessibility still exist. But she reminds herself that that is not the case.

“The fact that people have heard of us and reach out to us is a huge success,” she said.

And Valenzuela is as committed as she was in 2016 when she helped start ASHPA.

“We’ll keep doing the work until we get this community ahead,” Valenzuela said. “As for the vaccine, we’ll continue to do it until we’re no longer needed.”