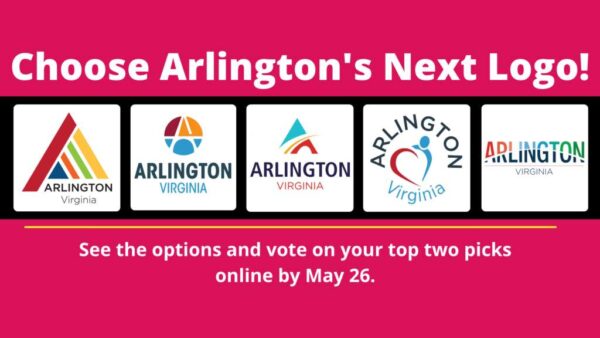 Not everybody is a fan of the five finalists for the new Arlington County logo.

“There seems to be a LOT of dissatisfaction with the new county logos,” one reader said, in an email to ARLnow.

Locals are being asked to weigh in on the proposed logo designs by May 26, ahead of County Board consideration in June. But a plurality seem to be calling for more choices.

In an unscientific ARLnow poll this week, about 46% of more than 3,000 respondents said the county should “go back to the drawing board.” The most popular choice — the fifth logo above, on the far right-hand side — was the preference of 24% of respondents.

The dissatisfaction is more stark on some social media channels.

“I’ve noticed that the five new Arlington County logos that residents have been asked to vote on are being universally panned on both Nextdoor and Facebook,” another ARLnow reader said in an email. “In fact, I don’t think I’ve seen a single positive comment out of scores. My Nextdoor group in North Arlington had more than 25 comments and not a single one positive.”

“Sure hope the County is listening,” the reader added. “Time for them to go back to the drawing board.”

Perhaps it’s not necessary to solicit new designs. As pointed out by a local resident on Twitter, the original call for design ideas from the county yielded dozens of notable submissions that were ultimately rejected.

Some pretty good gems in here too: pic.twitter.com/6Cz3gaGzNd

Now I'm just annoyed. This is an earlier version of one of the ideas that made it through. It used to have the colors of the Metrorail lines that run through Arlington. Great symbolism.

Why did they change that to this??? pic.twitter.com/EKbowvfZBm

The new logo is needed in order to do away with the illustration of Confederate Gen. Robert E. Lee’s plantation house — a prominent Arlington landmark — in the current logo, but the call for logo ideas in February specifically asked submitters to “think about the images, symbols and feelings unique to Arlington and shared by people across neighborhoods.”

The finalists seem to be more abstract in nature than many of the discarded designs that include the shapes of specific landmarks, buildings or geographical borders, however.

Part of that may be a function of the requirement for a logo that works in numerous visual settings and contexts. The new logo should “look good” in black and white and in color, and when it is printed on something as small as a pen and as large as a billboard, the county said in February.

Asked this morning whether the five finalists may be revisited and other logos considered, given the reaction so far, Arlington County spokeswoman Jennifer K. Smith said only that the county is seeking more feedback.

“Engaging and involving the community is central to the process of developing a new logo — and that process is ongoing,” Smith told ARLnow. “We want as many people as possible to weigh in on the final design options. The Logo Review Panel will use the voting results to offer a recommendation to the Arlington County Board in June. To date, well over 9,000 people have voted on the new logo — and we’re looking for many more.”

“A 14-member Logo Review Panel was appointed by the County Manager in late January of this year, following a communitywide call for applications,” she explained. “This is a diverse group representing different ages, ethnicities/races, neighborhoods, and backgrounds. Community members also were asked to submit their ideas and concepts over a series of week earlier this year — and we received about 250. Then, over the last several months, the Logo Review Panel has worked hard to further define the considerations as well as further develop the ideas submitted by the community, in collaboration with a design firm.”

The current county seal and logo — which both feature a representation of Lee’s Arlington House — were first adopted in 1983 and 2004, respectively.

The logo panel’s charge, from its first meeting: “Replace existing logo and County seal with new logo as soon as practicable.”