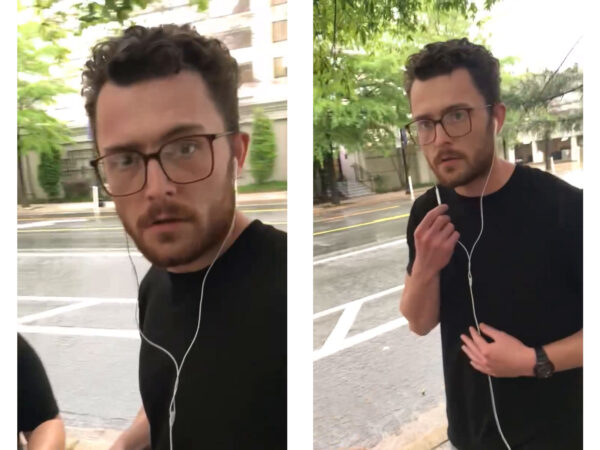 A man allegedly left a local restaurant without paying, shoved a restaurant employee, and used anti-Asian slurs, according to police.

The incident happened shortly before 6 p.m. on Tuesday along Crystal City’s restaurant row, on the 500 block of 23rd Street S.

Restaurant employees told police they confronted the man after he didn’t pay the bill, but he kept walking away. The man also allegedly pushed an employee to the ground while another recorded the encounter on video.

The alleged assault is being investigated by Arlington County police. The employees, who are of Asian descent, told officers that the man used racial slurs, which has been referred by ACPD to Virginia State Police as a possible hate crime.

More from a police press release, below.

The Arlington County Police Department’s Homicide/Robbery Unit is investigating the assault of a restaurant employee and is seeking the public’s assistance identifying the suspect who was captured on cell phone image.

At approximately 5:54 p.m. on May 4, police were dispatched to the 500 block of 23rd Street S. for the report of an assault. Upon arrival, it was determined that the suspect left a restaurant without paying his bill. Two employees approached the suspect outside the establishment and requested he return to pay. The suspect continued walking away and when one employee began recording him, he pushed the other employee to the ground and ran off towards Richmond Highway. The victim of the assault did not require medical treatment.

During the course of the follow-up investigation by detectives, it was alleged that the suspect used racial slurs towards the employees, an Asian male and female. In accordance with Virginia law, this incident has been reported to Virginia State Police as a possible hate crime.

The suspect is described as a white male in his late 20’s to early 30’s with dark brown hair, a light brown beard, approximately 5’9″ to 5’11” tall and weighing between 150 to 160 lbs. He was wearing square rimmed glasses, headphones, a black t-shirt, gray and black sweatpants and black sneakers at the time of the incident.

This remains an active criminal investigation. Anyone with information related to this incident or who can identify the suspect is asked to contact the Arlington County Police Department’s Homicide/Robbery Unit at 703-228-4180 or [email protected] Information may also be reported anonymously through the Arlington County Crime Solvers hotline at 1-866-411-TIPS (8477).