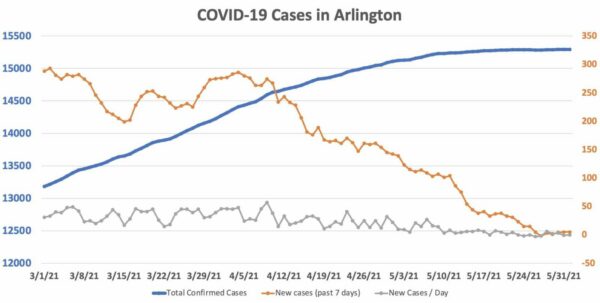 The net number of new coronavirus cases reported in Arlington is hovering just above zero.

A net of five new cases have been reported over the past seven days, according to Virginia Dept. of Health data. That includes the removal of an unspecified number of probable cases that ended up testing negative.

Last week the net number of new cases actually turned negative. But an Arlington County spokeswoman revealed that new cases were still being reported, they were just being obscured by the removals. Over a five-day period in which a net -1 cases were recorded, there were actually 10 new cases, according to Jessica Baxter.

Arlington’s drop in new cases is nonetheless dramatic, particularly as many health restrictions are lifted.

The drop is being attributed to the rise in vaccinations. As of this morning, about 65% of those ages 12+ who are eligible to be vaccinated in Arlington have received at least one shot, according to VDH.

In all, 231,629 vaccine doses have been administered, 135,073 people have received at least one vaccine shot, and 109,263 people have been fully vaccinated, VDH reports. Those figures exclude anyone who has been vaccinated by a federal agency like the Dept. of Defense and the Dept. of Veterans Affairs.

The last reported Covid-related death in Arlington was two weeks ago, while only two Covid-related hospitalizations have been reported over the past week, per VDH.