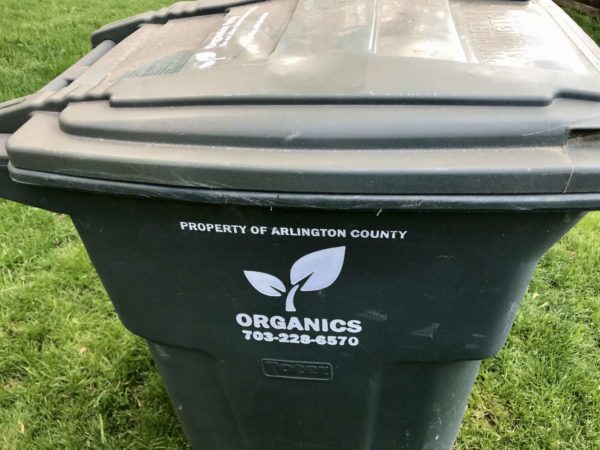 Residents receiving county curbside collection services — mostly those in single-family homes and townhouses — will be able to toss unused food into their green yard waste bins and bring them to the curb on collection day, starting Monday, Sept. 6. Those scraps will be composted in Prince William County and returned to Arlington as soil.

“This is going to be for everybody who is a part of the household solid waste collection program,” said Erik Grabowsky, the chief of the Solid Waste Bureau of the Department of Environmental Services, during a community forum last week.

Arlington will be the first jurisdiction in Virginia to provide the service to all residential customers, he said.

The initiative is part of the county’s goal to divert 90% of resources from landfills and incinerators by 2038. It is also the last significant program to be implemented from the county’s 2004 solid waste management plan, Grabowsky said.

“There are many good reasons for adding a food scraps collection program,” he said, such as diverting useable waste from landfills and incinerators. Creating and using compost “will build healthier soils and also allow us to pay attention to the amount of food waste we are generating — which may change purchasing habits and may save us money.”

County household waste collection customers should have received a postcard previewing the service change and will soon receive an informational cart hanger, he said. The second of two virtual community forums will be held tomorrow and the county will be delivering “starter kits” with a two-gallon food caddy, 40 compostable bags and educational materials, throughout the month of August.

Residents should still put disposable containers and other products marketed as “compostable” in the trash.

“A lot of the materials have plastic liners,” said Adam Riedel, a county environmental management specialist. “We want to ensure the highest quality product, which means keeping out those contaminants.”

That could change if the federal government issues stricter regulations for creating and marketing disposable products as “compostable,” he said.

DES recommends keeping the pail, lined with a compostable bag, on a kitchen counter. Just before one’s weekly trash pickup time the food scraps should be bagged, put in the green cart and rolled out for collection.

Riedel said he keeps his pail on the counter and he notices no odor, but for those who are worried, he suggested keeping the pail or scrap bag in the freezer or refrigerator.

Grabowsky said he does not envision proper disposal requiring much enforcement.

The scraps will be converted into nutrient-dense soil at Freestate Farms in nearby Prince William County, per a new agreement approved by the County Board in February. The facility is run via a public-private partnership between Prince William County and the private corporation.

The scraps will go into special concrete bunkers, where they will be exposed to the right mixture of time, moisture and air that will cause the organic material to heat up and break down.

Some of that soil will return to Arlington to be used in parks, backyards and community gardens. It will also be available for pickup just like mulch.

Regardless of where in the county one lives, all residents can currently drop off their scraps at Earth Products Recycling Yard in Shirlington (4300 29th Street S.) or the Columbia Pike Farmers Market on Sundays and MOM’s Organic Market.

That may be how many Arlingtonians continue to dispose of their scraps, as expanding the program to apartments, offices and restaurants — which are all currently served by private waste collection companies — would require more collectors, Grabowsky said.

“We want the market to grow for people providing the service,” he said. “We have a facility that a can manage it — now we need the people who can collect it bring it to the facility.”

He expects the new program will increase the countywide recycling rate from 52.1% to somewhere between 53-55%.

This program will be funded through the Household Solid Waste Rate, Grabowsky said. Although this program is being added, the overall bill dropped to $318.61 due to other savings, he noted.