In my last column, I mentioned one of the great things about getting people back into the store has been the questions I’ve been fielding from all of you, and the conversations it has allowed me to get started.

My weekly beer newsletters I send out frequently feature a section belovedly titled “Arrowine House of Lagers,” and that is driven, in part, by the increase in both supply and demand. But honestly, I’d be doing it even if it was just for my own personal amusement. There is, over and over, one subsect of lagers that seems to beguile folks: the Kellerbier. Even a few years ago the style remained relatively obscure here in the U.S., and traditional German versions rarely traveled this far.

Let’s make one thing clear: All Kellerbiers are not created equal. Kellerbier means simply “cellar beer,” and it is a style of lager that would have traditionally been matured (or lagered) inside of an oak cask stored in a cave or cellar. Inside of that cask, the beer would remain unfiltered and unpasteurized. and in this case, it would have had its bunghole (yes, they really call it that) left open to the surrounding cellar air. It would have carbonated itself gently and naturally but not to the level that it would have if it had stayed in a closed container trapping the CO2. 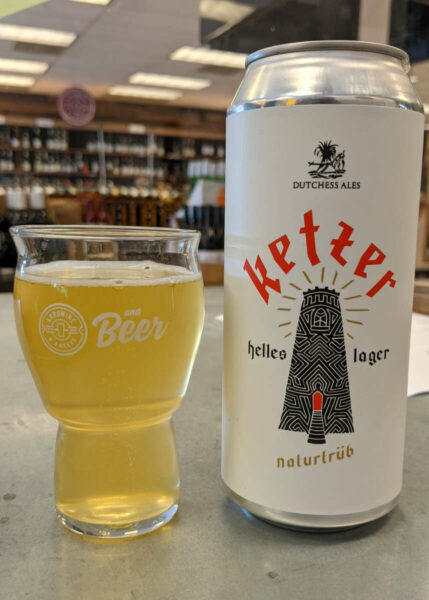 While this openness does allow the flow of air from inside the cave, it is completely different from an open or even spontaneous fermentation, so don’t expect fruity open-air pale ale esters or the wild funk of a lambic. Served directly from the cask, this beer would be cloudy, lightly carbonated and perhaps softer than a longer aged traditional lager. Outside of that requirement, any lager could be considered a Kellerbier if it was served in this method, right?

So wait, does that mean that my New England unfiltered hazy IPAs could all be considered Kellebiers as well? Nope — completely different styles. What about a cask of English Best Bitter? That’s closer, but Germany’s brewing traditions utilized their many natural caves for lagering as opposed to the British traditions of warmer fermenting ales. Perhaps you’re inducted into the Cult of Rothaus and love their unpasteurized Pilsner. You might be thinking unpasteurized, lager this HAS to qualify — but alas no. That doesn’t mean this increasingly more popular style isn’t without its variances.

The different base beers of a Kellerbier can vary in many ways, especially as the style has gained interest from many American craft brewers. In Port City’s recent Franconian Kellerbier, you’ll notice a more pronounced hoppiness and slightly darker malts traditional to the Franconia region, but you’ll also find in Dutchess Ales superb Ketzer that it can be just as equally a pale smooth lager with a more balanced flavor. The Ketzer was recently awarded 98 points from Beer and Brewing, and it is every bit well deserved. I wrote about this beer in our weekly newsletter when we first received it, and I was really blown away by it. I categorized this as being a “capital B” beer just in a most classic sort of sense. Originally, I had drawn comparison to the All-Time Great NBC Sitcom “Cheers” and how this is the beer I’d want when I walked into the bar, but I’m going to update that to an equally timely — yet perhaps seasonally appropriate — reference and wish that with the Family Truckster broken down in the desert, my Dad had shared a beer with me, and it would be the greatest thing in the world.

I look forward to seeing more and more takes on this style popping up on our shelves in the upcoming months. I really wish we could bring in a few of the fantastic versions I’ve had friends bring back from a number of Midwest breweries, and it’s exciting to see more versions coming from the East Coast as well. If you’ve got any favorites or other questions drop them in the comments below.