A Lyon Village homeowner’s attempt to deter dogs from peeing on his prized bushes has prompted a major controversy on the local Nextdoor social network.

A post about the plastic “spikes” placed between the bushes and the sidewalk prompted outrage, hundreds of comments and even — reportedly — calls to police, despite the fact that it turned out to be a commonly-used product.

Eric Wang says he first became aware of the Nextdoor post when he noticed an ARLnow photographer taking photos of the blunt, somewhat bendy spikes, “as well as a number of people passing by and checking out the mats through the day.”

“I figured something was up, so I looked on Nextdoor and it was at the top of my feed,” he said in an interview over email. “I had stopped using Nextdoor for several months because of toxic content like this.”

The initial post alleged that the spikes — actually a product sometimes called a “scat mat” that’s advertised as an “gentle [way] to scare or irritate animals without harming them” — were “sharp” and could “do some damage to [dog] paws.” 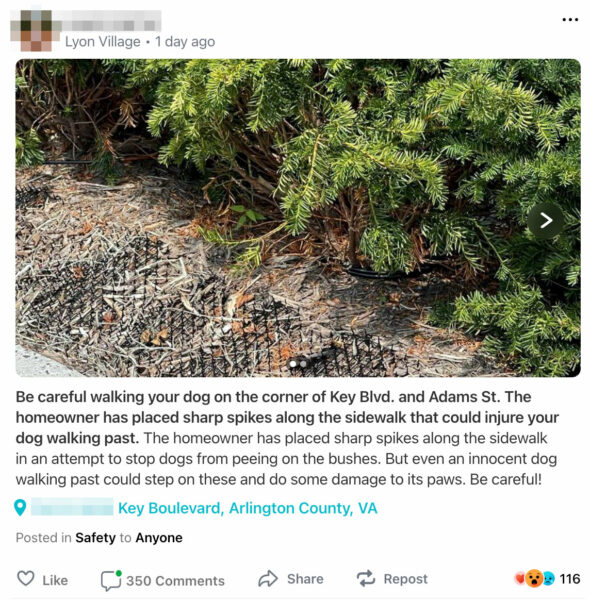 Quickly, dozens of people piled on in condemning the homeowner, who Wang later identified as himself.

Among the comments that followed: “What a nut,” “what a sicko,” “clearly DGAF about anyone besides himself,” “just horrible,” “pure evil,” “pretty sick behavior,” “sociopathic behavior,” “what an ass.”

Wang’s modern home near the intersection of Key Boulevard and N. Adams Street, in the affluent neighborhood north of Clarendon and Courthouse, is distinctive. It has also caught the attention of local residents due to the prickly-worded signs Wang previously posted about dogs peeing on his bushes.

“Dear dog owners: your dog’s piss is killing these shrubs!” said the sign, a photo of which was posted in the Nextdoor thread. “Each of these shrubs costs $300. If you’ve been allowing your dog to piss on these shrubs, please kindly remit compensation for the damage you have caused.” 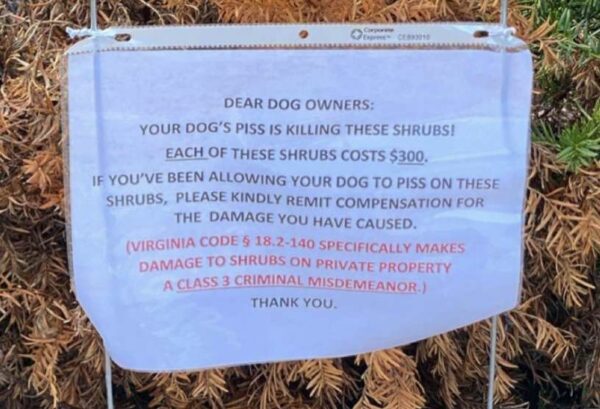 “After my first set of signs was not well-received, I relented and created a second set of signs (which nobody on Nextdoor bothered to post, which shows an intent to shade the facts here),” Wang told us, recounting how he finally decided to buy the mats.

“The second set of signs was meant to be humorous, and included a graphic of a smiling urinating dog with a red circle and slash through it and the words, ‘Please, no pissing on the shrubs.’ Neither set of signs was particularly effective, and they also weren’t very weatherproof,” Wang wrote. “So I went online and did some research and purchased the scat mats based on the product reviews I read — many of which were posted by pet owners.”

On Nextdoor, numerous people — who post using their verified full name and neighborhood — fretted that children, seniors and those with disabilities could fall and injure themselves on the spikes. They called for the mats to be reported to the authorities, for Wang to be sued, and for other forms of retribution.

At least two people posted that they called police and were told nothing could be done. An Arlington County Police Department spokeswoman said she could find no record of calls regarding the spikes.

“The reaction is completely unhinged,” said Wang, an Ivy League-educated lawyer. (The person who started the thread is also an attorney, according to his LinkedIn profile.)

“The over-the-top… online pile-on represents the modern-day dangers of the Internet mobocracy,” continued Wang. “The knee-jerk reactions show a complete intolerance for facts and hatred for rational thinking. While this is a relatively minor example compared with phenomena like January 6, COVID denial, and anti-vaxxers, it is part of the same social pathology.”

Shortly after Wang started posting comments defending himself — “I’m sorry, but my property is not a public bathroom for the neighborhood dogs,” he said in one — many were removed and Wang was suspended from Nextdoor for not being “respectful to your neighbors,” according to screenshots reviewed by ARLnow. 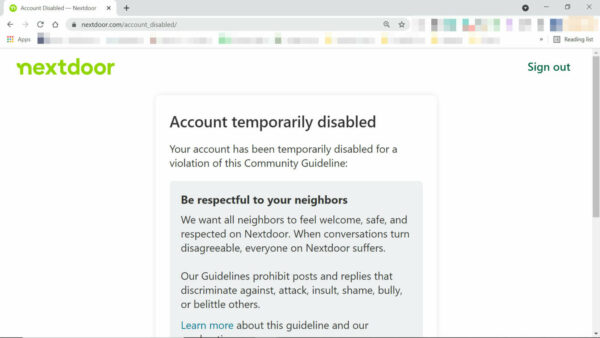 Other comments that defended him were also removed, though accusations that those residents were somehow in cahoots with Wang, or were Wang using a false identity, remained. (Wang denied that he knows one particularly vehement defender, who posted dozens of comments before disappearing.)

The number of comments on the post were about 300 earlier today, down from 350 yesterday.

The criticism of Wang extended to commentary about his custom-built home.

“That house is an eyesore,” wrote one person.

“House as ugly as sin,” wrote another

“That house is heinous… our eyes are offended,” said a third.

The online invective is not reflective of what Wang has heard directly from neighbors, however.

“I’ve received private messages of support through Nextdoor,” he said. “Offline, and not as a direct result of the post, but related to this issue, I’ve had neighbors pass by and offer me words of support for my efforts to address the dog problem. There are a lot of homeowners who are in the same situation but are afraid to speak up because of the vile invective and hate directed at them that we see on Nextdoor.”

It’s not just Wang. Yesterday, as ARLnow was reporting this story, the parody account Best of Nextdoor retweeted a woman from Rochester, New York, who said her benign animal-related post on the website prompted comments that could be construed as death threats.

Nextdoor, which bills itself as a place “where communities come together to greet newcomers, exchange recommendations, and read the latest local news,” has previously been criticized for racial profiling among its users.

The company is preparing to go public via a SPAC under the ticker symbol “KIND” and has since touted a focus on moderation, anti-bias training, and encouraging civility in local conversations.

The company usually limits the reach of posts to small geographic areas, though the post about Wang’s scat mat has been visible to and attracted comments from neighborhoods around Arlington.

“I disagree with President Biden that social media and online platforms are ‘killing people’ or otherwise responsible for this pathology,” he said. “People are killing people and themselves. People need to commit to exercising reason when engaging with online content and not just latching on to the first emotion that comes to mind.”

“Take a deep breath and gather your facts,” Wang added. “Put things in perspective. And stop the hate.”

On the Nextdoor thread, some people called for cooling down of the rhetoric.

“Certainly not the community friendly addition but they won’t be blowing out mobility scooter tires or impaling children,” wrote one person.

“I have these in my raised beds and can report zero carnage among the wildlife,” said another.

Others marveled at how a discussion in the otherwise friendly neighborhood became an all-out flame war.

“Some people on here have way too much time on their hands,” a resident wrote.

“I’m ashamed of our First World problems,” a second person posted. Another replied: “We live in the First World, though.”