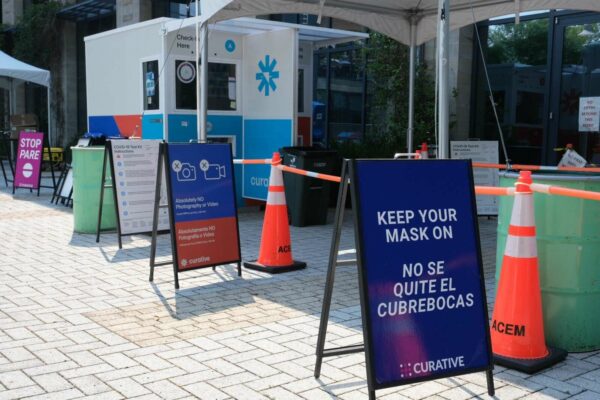 Amid a rise in coronavirus cases, community leaders and the Arlington County Public Health Division are continuing to find ways to target particular demographics for which more outreach is needed.

For example, vaccination rates differ by nearly 20 percentage points between Asian or Pacific Islander and Latino Arlington residents, whose rates surpass 70%, and Black and white residents, whose rates hover around 56-58%. Meanwhile, the age group with the lowest vaccination rate is 25- to 34-year-olds, 59% of whom are vaccinated, while the highest rate is among 16-17 year olds, of whom 96% are vaccinated, according to VDH data.

Some disparities, particularly in sub-groups with larger population counts, can be tied demographic factors. But some data points, especially for smaller population sub-sets, may be tied to estimation errors, according to the Virginia Dept. of Health.

According to VDH spokeswoman Cindy Clayton, certain demographics with smaller population counts can lead to these high percentages.

“This is likely due to estimation error in the population data, especially when the denominator is a small group, like 16-17 year-olds or Native Americans,” she said. (More than 106% of local Native Americans appear to be vaccinated, according to the state dashboard).

The state health department uses census data compiled and modeled by the Centers for Disease Control and Prevention to calculate vaccine percentages at the local level.

“Although efforts were made to use the best available data and methods to produce the bridged estimates, the modeling process introduces error into the estimates,” according to the CDC’s explanation of the demographic data it stores.

Although some numbers have to be taken with a grain of salt, at this point, both community leaders and the county are now tailoring their vaccine outreach efforts toward “myth-busting” and focusing on particular subgroups.

“Arlington continues to encourage everyone 12 and older in Arlington to get vaccinated to protect themselves, their loved ones and their communities,” said Ryan Hudson, a spokesman for the Arlington County Public Health Division. “Vaccines are free for everyone, and offer the best form of protection against COVID-19.”

The county operates two vaccine clinics, open seven days a week, to accommodate everyone in the community, he said. The division also conducts “field missions” with targeted vaccine clinics at strategic community locations, including libraries.

More recently, the division’s communications have focused on “myth-busting,” which he says is “in an effort to dispel much of the misinformation that exists. Some examples he said include the impact of the vaccine on puberty, fertility, pregnancy and breast-feeding, as well as concern about corner-cutting due to how quickly the vaccine was developed.”

Rev. Dr. DeLishia A. Davis, the lead pastor at Calloway United Methodist Church and the president of the Arlington Coalition of Black Clergy, said the county’s faith communities have joined together to encourage people to get the shot. In the initial rollout, access was more difficult for persons of color, she said.

“Many community residents were dissatisfied and disenfranchised,” she said.

But the tide has shifted with work by the Arlington branch of the NAACP and the Arlington Coalition of Black Clergy, which worked with the Complete Vaccination Committee to improve access and distribution.

“We celebrate progress, and continue to work to register more persons for vaccination in the upcoming weeks,” she said. “There has been a strong number of persons of color in Arlington County that have been vaccinated in recent months.”

African-American churches and the NAACP registered more than 22,038 people for vaccines, she said. The Macedonia Baptist Church operates as a vaccination clinic with a concentration on persons of color, she said. More than 7,000 people have been vaccinated there, she said. Mt. Olive Baptist Church has been an express clinic.

The African American pastors in Arlington created a public-service announcement to encourage people to get vaccinated, which was was shared in worship services throughout Northern Virginia.

Meanwhile, Janeth Valenzuela, a member of the Arlington Schools Hispanic Parents Association — which was registering Latino residents for shots earlier this year — said she is excited to see higher vaccination rates. Her group has taken a step back from registering people themselves and has been referring people to the Arlington Mill Community Center clinic.

“I was in the impression that we weren’t doing enough,” she said. “Even though we spent so many hours worrying that they aren’t getting vaccinated, they are. I’m happy that we’re doing something that’s changing their conscience about the vaccine.”

Many were worried initially about the side effects for their kids, but now, they’re looking to get their kids vaccinated. Another motivating factor is seeing families still in their home countries in Central America facing vaccine shortages, she said.

Valenzuela’s goal is to get to 100% vaccinated.

“It’s very important for our community,” she said. “If they get sick, they don’t have insurance and they could lose their jobs. There’s a chain of effects if someone gets COVID.”

Anuj Khemka contributed to this report.

END_OF_DOCUMENT_TOKEN_TO_BE_REPLACED

More Stories
Upcoming Free Seminar: 7 Steps to Sell Your Home for MoreKeep an Eye to the Skies Amid Severe Weather Threat Today